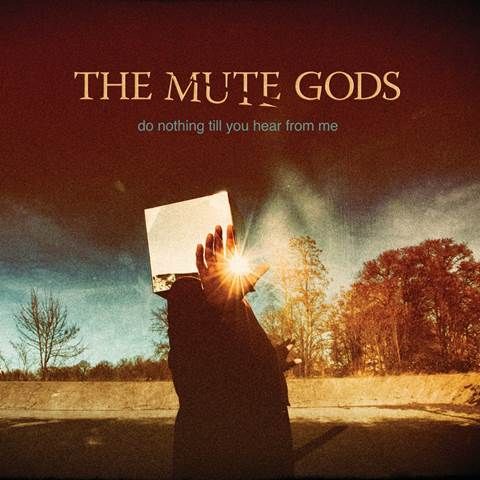 InsideOut Music recently announced the signing of The Mute Gods, a brand new band from the mind of renowned bassist, chapman stick player & vocalist Nick Beggs alongside drummer Marco Minnemann (Steven Wilson), and long-time Steve Hackett collaborator & keyboardist Roger King. Now it has been revealed that their debut album ‘Do Nothing Till Your Hear From Me’ will be released 22nd January 2016, and you can find the enigmatic artwork for the record, created by Lars ‘Zeituhr” Tellmann, above.

Nick Beggs had this to say:

“The record has a number of moods. But overall, it’s a rather disgruntled rant at the dystopia we’ve created for ourselves and our children. The song “Swimming Horses” is a warning about the passing of time and the rising of tides. “Feed the Troll” is a dedication to all those who have too much time on their hands.

The person who has helped me realize this record is Roger King. We worked together for quite a few years in the Steve Hackett band and when I approached him last year about producing, I was honored and surprised when he agreed. His strengths are my weaknesses and I believe we complement each other rather well. But the public will have the final word on that.

After working extensively with the Steven Wilson band, I invited Marco Minnemann to play drums for me. Although I have a couple of other guest drummers like Nick D’Virgilio and Gary O’Toole, Marco is playing on the majority of tracks. He also added his genius with some sound modeling and guitar.

Sonically, you can expect an album that tips its hat in the direction of alternative rock and pop, due for release in early 2016.”

Nick has most recently been involved with Steven Wilson’s solo band, both in the studio and on tour, whilst also playing live with legendary guitarist Steve Hackett as part of his Genesis Revisited run of shows. In recent years he has contributed to projects such as Lifesigns, Fish On Friday & Lonely Robot, as well as playing live with Rick Wakeman.

The Mute Gods have also launched a brand new website which will be updated with new content and information on how the band came together in the coming months. Head over there now: http://www.themutegods.com