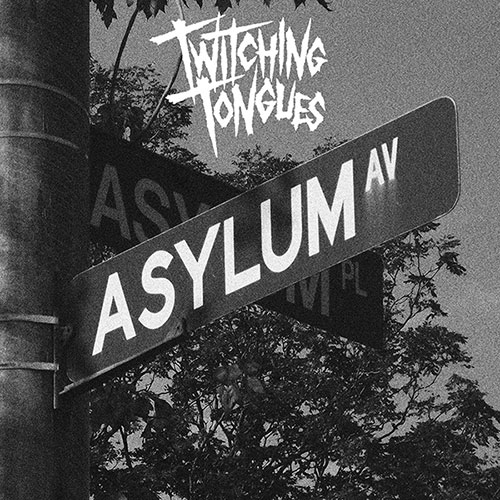 Twitching Tongues‘ Colin Young (vocals) comments: “Recording ‘Asylum Avenue’ made me the most emotional of any of the songs on the album. It is a lyrical successor to ‘Preacher Man’, and deals with the trials and eventual triumph of mine, my father’s, and my brother’s over a certain situation in our lives. It’s an odd feeling to harbor the desire to kill a man who wronged you so early in your life so many years later, but this was a very therapeutic means of letting go of that frustration. This is a song I feel that both old and new fans of the band will appreciate. It has some things we haven’t done before, but also some classic elements that to me, make it feel like a true Twitching Tongues song.”

For another preview of Disharmony, be sure to check out the following previously released singles, plus live set from Philadelphia’s This Is Hardcore festival in July:
–“Sacrifice Me”: https://soundcloud.com/metalbladerecords/twitching-tongues-sacrifice-me/s-95dic
–“Disharmony”: https://www.youtube.com/watch?v=ZxpU88kACxg
–This Is Hardcore festival live footage: http://hate5six.com/player.php?album=3581545

Known for their unique sound that resists lazy classification, Twitching Tongues has dropped two full-lengths, toured extensively and garnered a cult following since their formation in 2009 by brothers Colin and Taylor Young. Yet it’s the band’s third album – and Metal Blade debut – Disharmony that sees the LA-based quintet truly come into their own. Dynamic, powerful, and instantly gripping,Disharmony pushes musical and emotional boundaries to create something that is not only fresh and exciting, but really matters. States vocalist Colin Young, “We’ve always put everything we’ve got into our music, but this one is more personal. It’s darker, it’s more aggressive, and I’m sure it will be more polarizing too, but we’re more invested in it than anything we’ve done before, and we couldn’t be prouder of the end result.”