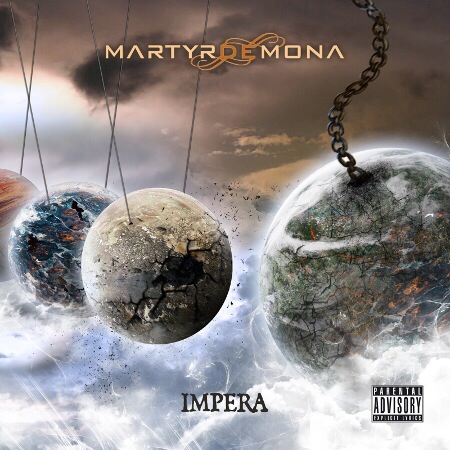 It is, as AC/DC so rightly observed, a long way to the top if you want to rock n roll.

This is a fact that Midlands rockers Martyr De Mona perhaps reflect on often. MDM have been playing gigs so long that it’s easy to forget that “Impera” is their debut record.

The longevity is perhaps a double-edged sword. Firstly it must have been frustrating for the band to have these ideas in their heads and have no way to express them, but on the flip-side, when you listen to this album, you are struck by how polished, experienced and mature it sounds.

This is a band that, rather than searching for their sound and finding the path in baby steps, are emerging not wide eyed into the world, but rather with steely determination that almost says: “Come on then World, what have you got?”

The opening tracks “Siege Mentality” and ” Influence And Persuasion” are very much the clarion call. They are huge, great slabs of alternative rock, but underpinned with epic intent. Then we get to “Reprisal.” After a powerful opening, it settles into verses that echo prime Alice In Chains. An angry track, with singer Louis Hale appearing to bemoan apathy: “Degenerating away/contented are the disaffected” goes the chorus.

“Impera” for all it’s brilliance – and there are moments here that suit that word perfectly – is not totally bombastic. “Sentient” for example, is tender ballad with the key line “I don’t want to make you suffer anymore,” while the title track is packed with modern crunch – as well as clean lead and growled background vocals – and surely would sound phenomenal in a live environment.

This is not a record that appears to have come from a spontaneous jam session. Rather you suspect that these young men have thought this through until it sounded exactly like they wanted it to. “Gravity Shakes” is perhaps the best thing here, it seems to encapsulate everything the band are trying to achieve, it is juxtaposed beautifully by “Kyo” which follows, to make almost the perfect one-two punch.

By the time “Impera” closes, with “Suffer Unto Me” another fine epic, and “Hollow Shore” which pleasingly has traces of Dream Theater about it, you can only reflect that Martyr De Mona have crafted something they can be thrilled with.

The stamp of Producer Romesh Dodangoda (who also worked on the Liberty Lies EP which we reviewed on MVM) is all over this, it’s a lush, brilliantly conceived record.

The boys in Martyr De Mona probably won’t want it pointing out but it’s over seven years since this reviewer saw them for the first time. Good things come to those who wait they say.

And this is a very, very good thing.