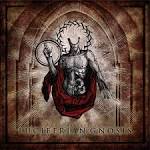 As the album title would suggest these Colombians Occultists are not the kind of guys you go to seek forgiveness for your sins. Black Metal and the traditional religious orders are forever at opposite ends of the spiritual spectrum. Just as they should be.

The band explore and share their take on this often pitiful world in which we inhabit and the myriad of lies, deceit and false prophecies that make up our daily struggles. It doesn’t make for comfortable listening but then the truth, or a version of it, rarely does.

The slow downstroke riff of the three minute opener “Sub Tuum Praesidium”, which roughly translated means something like “Under Your Protection”, introduces the album is a rising-from-slumber type manner that is much better than the image in your mind would suggest. It’s by no means a barn-storming entrance, particularly for a band that have taken seven years to release this, their debut album, but it is a statement of intent, of sorts. And good things do come to those who wait.

The fury gets truly released on the second track “Mysterium Fidei”, the translation of which you could probably make a guess at. Blackened terror of the highest order might be a suitable description of this track. From the off the vocals are unrelentingly venomous and the guitars cut through the ears like a chainsaw through a poor unsuspecting victim.

“Sekhem-Hra Apep” bides it’s time with a slow burning flame that begins to burn brighter, or darker if you like, as the twelve minutes unfold before returning to it’s beginnings but not before being taken a twisted ride through the inner workings of a band that have much to say and have no qualms about telling you.

The rhythm throughout the album is firm and tight and the odd slowed down passages, particularly on the second half of the album, merely give you short respite in an otherwise pummelling aural experience. It’s not always ferocious but it is always dark and heavy. Sometimes that’s a more terrifying prospect.