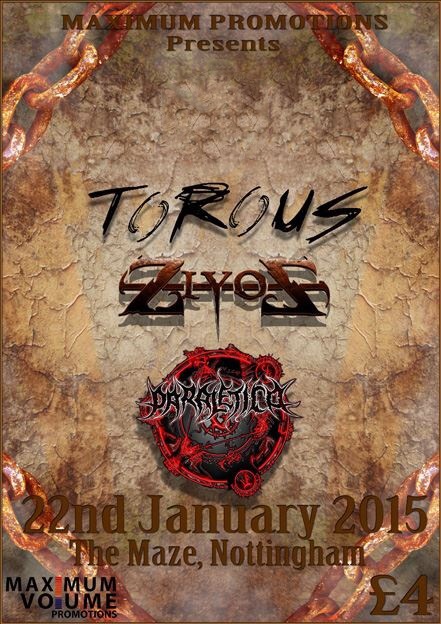 Thursday night, in the cold in Nottingham. Probably not what Torous dreamed of for their first show outside the West Midlands, but they aren’t the sort to let things phase them. Let’s be straight up here, Torous are here because MVM likes the band a lot and wasn’t going to miss the opportunity to have them on our first showcase night. The trio are one of those bands that play every note as if their lives depend on it and with the likes of originals such as “Crow Road” and new single “Sovereign Son” – which shows off their Celtic side perfectly – they have the talent to match their determination. And as always with the three there’s an interesting take on some covers. Torous are a band that have a lot to be excited about.

Ziyos are another band making their debut in the city, but have a more classic metal sound and from the off it’s clear that the Worksop five piece are bang on form. “Whispers” adds some “Black Album” era Metalllica crunch to the sound – as well as giving singer Jamie chance to get his whip out (we decide it best not to ask….) They too take the opportunity to air a new track – and ” Warpath” is a stunning, tight, gallop. “Liberate,” which is dedicated to “cheating ex’s,” is fast and angry, and their cover of “Symphony Of Destruction” is just a brilliant version of a brilliant song. They save the best for last. “Iron Army” takes the maxim “what are you rebelling against? What have you got!” To the next level (and manages to call David Cameron a ladies part while it’s at it, which is just fine with us!) This is a blistering set that’s is part King Diamond, part Saxon, part thrash and thoroughly superb.

Full On Thrash Metal. So says the banner which adorns the stage when Paraletica play. To be fair, they don’t need us to waffle, as that does the job perfectly, because The Telford quintet are just that. Singer Trig prowls the floor – and an audience member displays a mighty scream on cue – the band behind him rumble magnificently and songs like “Inferno” show just why the band have bagged a support slot when Cali legends Death Angel come to the UK in the summer. With new guitarist Dancing Dan displaying all his moves on his first show with the band, Paraletica are a band that plays angry, fast music with a smile on it’s face. After Trig has auditioned for a place in a shampoo commercial and tossed his hair around with abandon, there is more foot-on-the-monitor and horns up Old Skool thrash with “Martyrs Regret.” They also smash through the appropriately named “Colossus,” perhaps their heaviest song it is nothing short of a monolithic beast. This proves nothing if not that when they do slow it down, but only to get heavier, we are not in ballad territory here, despite Trig treating us to “Every Rose Has It’s Thorn” before the end.

Three brilliant bands, all showing the depth of talent there is in the metal scene right now. And nothing else needs to be said. Fantastic.