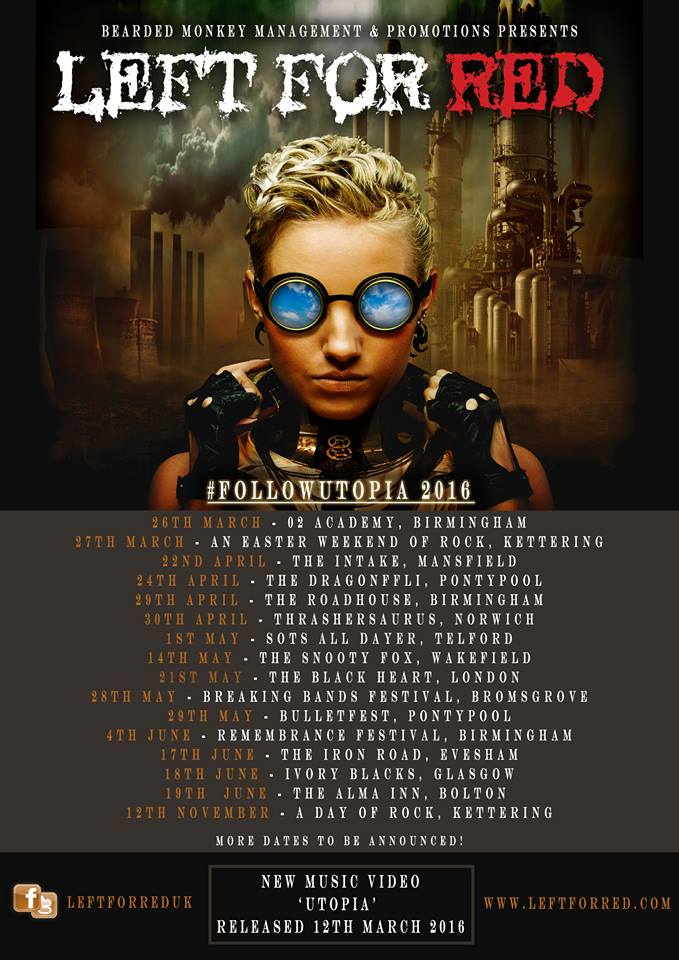 Too much sci-fi from Midlands metallers

Those Metal Monkey’s from Stourbridge, Left For Red are excited to reveal their new video for the single ‘Utopia’. The single is taken from the critically acclaimed album ‘All Things Known And Buried’ which was released last year.

Left For Red commented on the release of the single:“The video ideas and promotion came from us watching way too many Sci-Fi movies haha! The song and story to the video are about the people being lied to by the government in this case ‘Utopia Industries Initiative’. Although most people have been made to believe that everything is perfect, there are others who live in the real world that believe everybody should know how bad things are so they decide to hack into the governments network. The song itself includes heavy riffs, pounding drums and big choruses, it is one of our personal favourite tracks from the album.”

The official launch for ‘Utopia’ will be on March 26th 2016 at the 02 Academy, Birmingham where they will be joined by The Heretic Order, Kaothic, Devil’s Playground, Chemikill and Rustlung.
Physical copies of ‘Utopia’ will be available from the launch show onward. The CD will include two previously unreleased tracks; ‘Empty Shell’ which has been taken from their first EP and re-recorded, and an acoustic version of ‘Shatter’, which is originally from their album ‘All Things Known And Buried’. These two extra tracks have been recorded recently at Shredder Live Lounge Studios in Kidderminster.

…..and if that isn’t enough, Left For Red have also introduced a brand new store where you can purchase tickets for the single launch show or pre-order the ‘Utopia’ single which can be picked up at the 02 Academy, or shipped out after if you cannot make it down on the 26th March. There are lots of other exciting merchandise offers in the store, including some great ‘Utopia’ bundles, which are worth having a look at!http://leftforred.com/shop