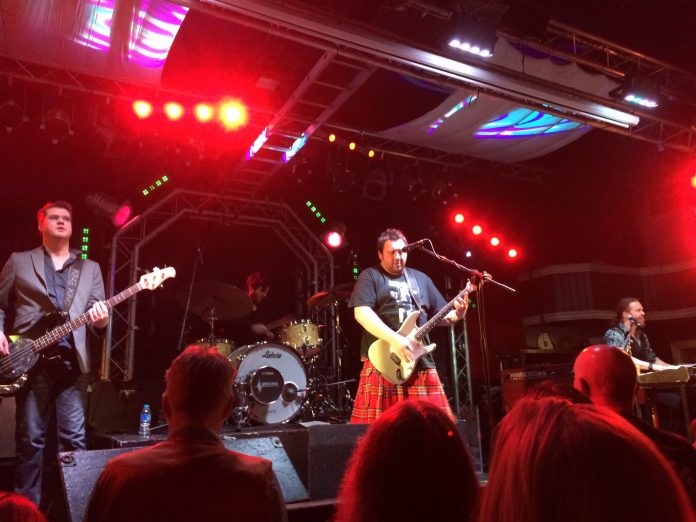 So good last year they did it again….

Last year, King King and Laurence Jones paired up in what might have been the best blues infused package of the year. Evidently it was so much fun they decided to do it again.

In truth it’s a natural pairing. Both acts spend so long on the road that surely nobody involved bothers with something as trivial as a mortgage. There’s more similarities too, not least of which is they are both exceptionally talented bands, but also the duo live by the old school adage that if you get in the van and take your brilliant songs to every place you can, then that’s the only way to succeed.

Take Laurence Jones for example. Miss him tonight? No bother, he’s headlining the UK next month. Mind you, if you’ve missed him tonight then the question is why. The young man from Warwickshire is growing up fast and is improving every time he takes the stage.

Tonight is a short, sharp run through 35 minutes of stuff from his own albums, “Southern Breeze” – from the second – is particularly impressive, and an interesting cover of Stevie Wonder’s “Higher Ground”.

Even with so little time to showcase his formidable talents here, there’s enough in new material like “Good Morning Blues”, “What’s It Gonna Be” and “Don’t Need No Reason” to win over another set of people in another room. And one place at a time this job will be done.

You can basically sum up King King before they’ve played a note. The four men – refreshingly free of image and any kind of visual cohesion – stroll on to a heroes welcome in a town they’ve never been before. Frontman Alan Nimmo grins, as he often does, and with his ubiquitous kilt ornamented with a t-shirt portraying AC/DC legend Angus Young (appropriate this week), walks to the microphone to utter these words: “my mother’s here tonight, boys and girls, so no bad language…..we’ll leave that to her”.

Barely a month ago Nimmo and his band were winning over arenas in support of Thunder, now they have a place where they’ve never played before eating out of their hands and we haven’t even started yet.

When we do get underway, seconds later, with the unmistakably strident “Lose Control” we are treated to the same set as they’ve played for a year or so – except it’s not, because somewhere along the way, King King have found the kind of swagger and confidence that puts bands into the next level up from here. So it is that “Rush Hour” has become an arena rock anthem, and “You Stopped The Rain” is just a massive singalong tune. Simply put, if King King were a great band before (they were) they are getting close to magnificent right now.

The sound is expanding too, older song “Long History Of Love” – dedicated to Keith Emerson here – features a wonderful organ solo from Bob Fridzema and with bass man Lindsay Coulson and Wayne Proctor as good a rhythm section there is, King King are bluesy enough to keep their old fanbase but classic rock orientated enough to really cross over.

The talent has never born in question and Nimmo can solo with the best of them as he proves on “Stranger To Love” but even the funky closer “Let Love In” seems to be a notch more uplifting than usual.

There’s another tour later this spring (naturally) and soon you’d imagine thoughts turn to album number four, that could just be the real breakthrough one too. Certainly on this form, with this swagger and with the fanbase growing by the day, King King do seem unstoppable.