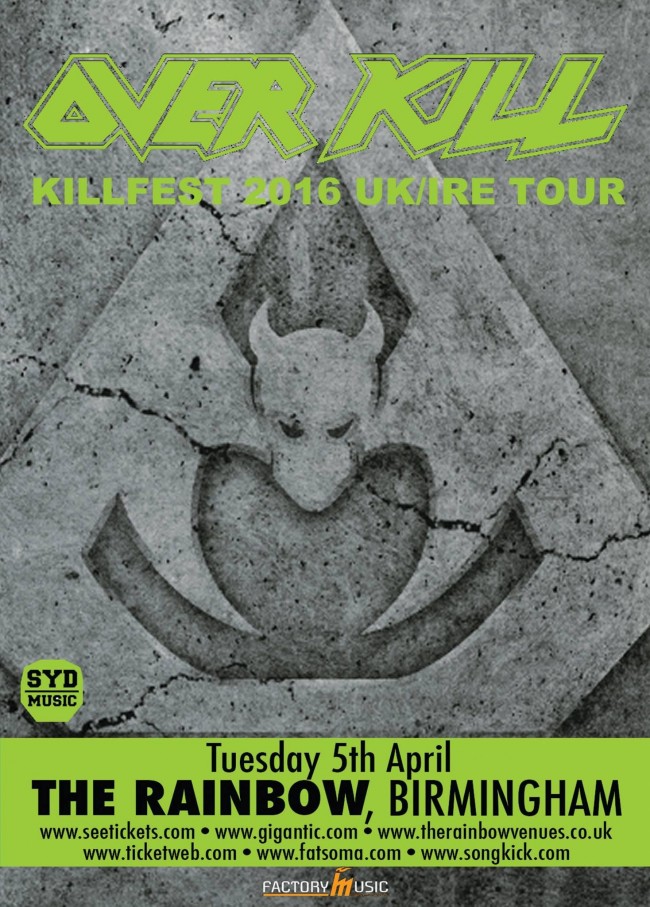 Overkill hit the UK – and they kick off in Brum!
New Jersey-based thrash metal titans Overkill are delighted to announce they will be returning to the UK and Ireland this April for a run of headline shows entitled the ‘Killfest’ tour.
Enigmatic frontman Bobby ‘Blitz’ Ellsworth had to say on the announcement;

“We are happy to announce we are coming back to the UK, to thrash it up with our cousins across the pond! Yes, yes, yes boys and girls from New Jersey to England, Ireland & Scotland the “Wrecking Crew” comes your way next April, kicking off in Birmingham on the 5th. So let’s mark the dates and remember, I’m easily disappointed! HA! Over the wall boys and give ’em the cold steel!”
Overkill are currently preparing for the release of their first worldwide Nuclear Blast output, an exceptional limited edition box set of 14 CDs entitled: ‘HistoriKill: 1995 – 2007’ which will be released on October 16th. It will include eleven Overkill albums across 13 CDs plus an extra bonus CD (incl. demos, remixes and an unreleased cover song) all in digi sleeves.

Support for the tour is yet to be announced but expect some thrash heavyweights. As the tour kicks off in Birmingham, expect unprecedented levels of mayhem! Tickets are available here: http://po.st/2mGo5i and will be more expensive on the door, that is if it doesn’t sell out beforehand! 14+, under 16’s must be accompanied by an adult.