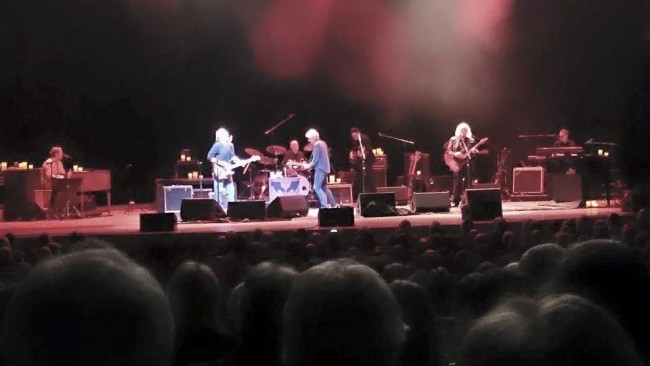 “As tight as a Tupperware lunch box” Garry goes to see CS and N in a “proper” venue
After seeing CSN twice before but both times in arenas it was finally time to see these legends in a proper venue….and what a venue the Symphony Hall is, the near capacity crowd welcomed three of LA’s famous or should that be infamous Troubadour scene onto the stage for the first part of the show.
The band opened the show with ‘Carry On/ Questions’ to rapturous applause before hitting us with the timeless classic ‘Marrakesh Express’…..the guys then spent a few minutes to thank us all for showing up and then took a few seconds to gaze around this splendid venue….you could tell they were impressed.
Each member brings their own special talents to the band as the ‘been there, done it, got the t-shirt’ legend that is David Crosby told us…..’Stephen Stills brings the rock, Graham Nash writes the anthems that people love to sing along with…..and I write the weird s**t’ which you can well imagine filled the room with raucous laughter.
The rest of the opening set contained classic after classic….’Long Time Gone’ ‘Southern Cross’ ‘Our House’ and the phenomenal ‘Deja Vu’ which involved each member of the CSN band able to do their own party piece….this band is as tight as a Tupperware lunch box.
‘Love The One You’re With’ closed the first set to deafening applause as the band walked off for a 15 minute interval…..they reappeared with the splendid ‘Helplessly Hoping’ before Graham Nash wheeled out the ‘I Miss You’ which he claims to have not done live for over 30 years….if that is true…it sounded pretty darn good I must say.
Each member has chances to show off their solo talents in these shows….Crosby treated us to the wonderful ‘Somebody Home’ along with some amusing tales of how he still has the gift to ruffle a few feathers…..Donald Trump didn’t fair well, but he also gave big thanks to his wife Jen of 38 years who he claims ‘is a saint….as I’m a bit of a nightmare at times’ before handing over the spotlight to Stephen Stills for ‘Virtual World’.
‘Guinnivere’ ‘Almost Cut My Hair’ and the stunning ‘Wooden Ships’ closed the main set to a noise I’ve not heard in the Symphony Hall for a long time…..before returning for the evergreen singalong ‘Teach Your Children’ and the mesmeric ‘Suite: Judy Blue Eyes’….all in all it was a magnificent evening….if I never get to see CSN again I will always remember the night I finally saw them in a venue fitting of those wonderful trademark harmony vocals…..sometimes a big metal shed like arena will just not do.