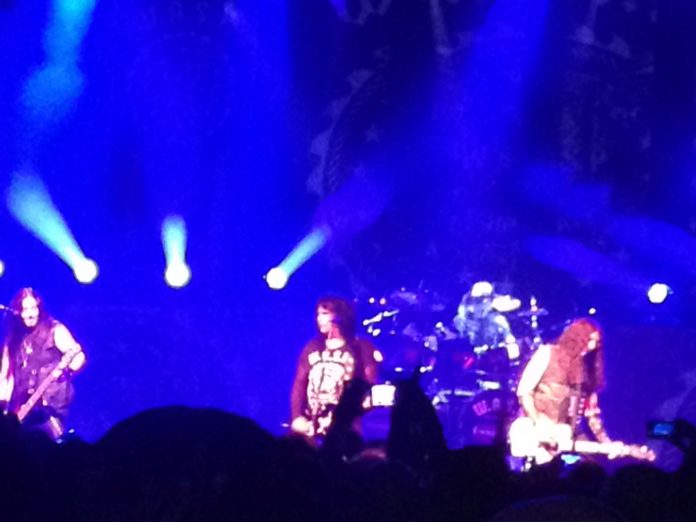 The support wants to take you to the doctor. The headliners don’t need no health professional. Confusion reigns at the Wulfrun

It’s been a while since MVM saw The Treatment. Almost two years in fact since they opened for Airbourne and they’ve – as David Bowie might have said – gone through ch-ch-changes since. First and most obvious, Mitchell Emms is in as singer and is one of a couple of alterations, but it’s more than that. There’s a new attitude. Gone are the fresh faced kids who were on that Classic Rock tour all those years back, and in their place has come a harder edged thought that they mean business here. This might be their last chance to dance and good lord they aren’t gonna die wondering. The songs are still excellent – but then they always were – and “Emergency”, “The Doctor” and “I Bleed Rock N Roll” are still the envy of most, but now there’s an urgency as if they know that this time it’s serious. New one “Beautiful” takes no prisoners and if it did it’d grab them by the throat until they enjoyed it and as they end tonight with “Shake The Mountain” which was on their first record, you can’t help but think of Heaven’s Basement. Obvious contemporaries, it took them nearly a decade to make it. In that context The Treatment are still mere babies, but they will do it too. They are sure and so can you be.

We began this by talking about the passing of time. That still feels apposite when thinking about W.A.S.P. For over thirty years Blackie Lawless has piloted this heavy metal cruise through all kinds of choppy waters. Those years may have dulled the shock value but still, here when he commands you to get “On Your Knees” in the first song, it’s impossible to resist it’s – and his – charms.

W.A.S.P in 2015 are – for all the supposed differences – essentially the same as they ever were. They are fast, furious and screeching heavy metal and they are still more then capable of writing great songs. New one “Last Runaway” one of three from the soon to be released “Golgotha” opus is magnificent and given that by the time it’s aired there’s already been time for “Real Me” and “L.O.V.E Machine” this evening is a skilful melding of the old and new.

There’s a fantastic light show and video wall too and whilst this might be a club gig to around 1000 people, it feels bigger. W.A.S.P feel huge, because W.A.S.P still understand the meaning of the word “spectacle” and they know rock n roll sometimes needs to be larger than life.

New ballad “Miss You” is both of those things. So OTT it’s almost impossible not to like it. Blackie had said earlier that it was written for “The Crimson Idol” record – it’s a brilliant addition to “Golgotha” (MV’s review of that is on the site on Sunday -Ed).

This thought continues a little later. As “I Don’t Need No Doctor” strikes up so does it’s original video on the big screen and, though the arena rock days might be behind them, still few can compete with W.A.S.P for being giant.

The main set ends with the title track of the new record with its kind of spiritual take on Power Metal, but Lawless and the lads ain’t done by a long chalk.

There’s a trio of tracks which prove why this band have endured where so many of their 1980s counterparts have ended up as has-beens. “Chainsaw Charlie (Murders In The New Morgue)” – for our money still the best thing the band ever did – is one encore “Wild Child”  (hammed up with two false starts) and “I Wanna Be Somebody” are another. Rock stars can have two encores. And this is every inch a rock star. Still.

So he wants to be Somebody? He’s Blackie Lawless. And he’s got the best around him he’s had in years – guitarist Doug Blair takes the honours all night. W.A.S.P might no longer be the offensive kings of scaring and scarring middle America, and their leader might be a born again Christian who is approaching 60 and has disowned his most notorious song – but they are still a brilliant band. And that, surely, never gets old.