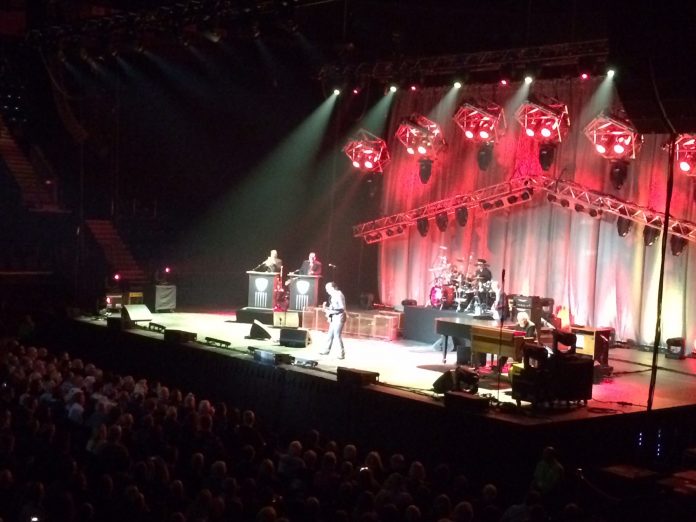 About three minutes before the scheduled start time tonight, the arena goes dark and there’s a voice on the loud speakers with a message. “Due to unforeseen circumstances, we regret to inform you….” He hasn’t fallen ill has he? For a second you aren’t sure. ….”that tonight’s One Direction concert that you hoped to see is cancelled, so we present you instead, the Blues stylings of Joe Bonamassa.”

With that some music starts and, seconds later, the man who at 38 years old essentially stands atop of Blues looking down on just about everyone else, whether they be young pretenders – and the staggering thought is in Blues terms he is a young pretender still – or grizzled old veterans, walks confidently out, in his trademark sharp suit and dark glasses and proceeds to administer a two hours 15 minute masterclass on how to play the blues.

Roughly the set is half covers and half originals. This neglects the fact that Joe Bonamassa makes every song his own anyway, whether it be “Spanish Boots” by Jeff Beck which appears in the encore here, or his wonderful version of “Hey Baby (New Rising Sun)” from Hendrix, you could, if you didn’t have the knowledge, assume they were just superb songs from the man playing them.

He’s got those too, of course and the likes of “Love Ain’t A Love Song”, which features clever use of the horn section, who are prevalent all evening, and “The Ballad Of John Henry”, which likewise allows drummer extraordinaire Anton Fig his chance to shine, will eventually be given the same legendary status as the BB King, Freddie King and Albert King songs which also feature.

The phrase “be so good that they simply can’t ignore you” is the type to come from a self-help book, but it’s apt to describe this native of upstate New York too. That is to say that this is not an “arena” show in the conventional sense. There’s no big screen, no huge light show, and very little in the way of spectacle, but over 3000 people have come out to watch brilliant musicians interpret some songs in a truly magnificent way.

It takes Bonamassa nearly 75 minutes to talk to his audience but when he does he makes great play on the fact he’s been coming to this city for 10 years and the crowds are bigger each time, and you do sense that he’s only just getting started. The musicianship (and he’s modest enough to say “behind me is the best band in the world”) is phenomenal. Reese Wynans, who has replaced Derek Sherinian on keyboards, was inducted into the Rock And Roll Hall Of Fame for his work with Stevie Ray Vaughan and Double Trouble, and he’s lost none of his skills. His work in throughout is exemplary, but he really comes into his own during the encore, as he cuts loose in “All Aboard” a cover of the Muddy Walters tune, and is so good he almost leaves Bonamassa himself without response. Almost.

Because Joe Bonamassa is seldom found wanting. Very few can play the guitar like him. The brilliant solos keep coming, but on “Sloe Gin” – one of those ones where he took someone else’s and made it his – he excels.

He’s also acutely aware of his new found status as a legend in waiting it seems. Listing all the show he’s played in the East Midlands he mentions one at The Flowerpot in Derby. There’s some cheering and quick as a flash he deadpans: “don’t you be clapping that, you weren’t there….!”

They were tonight and increasingly seeing Joe Bonamassa live is an I Was There type of moment. This concert certainly was. And nobody seemed to miss One Direction too much.