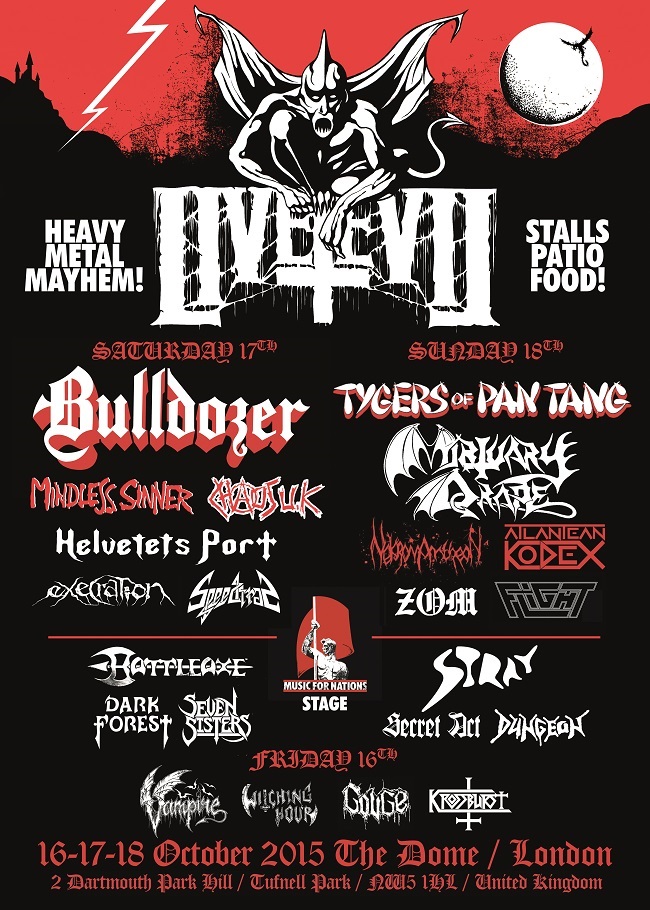 Legendary UK underground Heavy Metal blow-out Live Evil Festival is back with 22 prime cuts of molten steel this October 16th-18th once again at The Dome and Boston Music Rooms, Tufnell Park. This year the normally sponsor-free festival is proud to partner with the Music For Nations label who are sponsoring the second stage.

Saturday sees Italian speed metal pioneers Bulldozer play the first ever UK show. The cult legends were founded in 1980 and have recently been in the studio with Dave Lombardo ex-Slayer. Joining them are hardcore punk legends Chaos UK who formed in 1979 and killer reformed Swedish Heavy Metal legends Mindless Sinner who formed in 1982 but were many people’s ‘band of the weekend’ at Muskelrock Festival last year. Live Evil are particularly excited to finally be hosting fast-becoming-legendary young Swedish Heavy Metallers Helvetets Port. Rounding off the day are precocious young Norwegian Heavy Rockers Flight.

Sunday night sees Tygers of Pan Tan, who once competed with Iron Maiden and Def Leppard for the crown of UK Heavy Metal and who slay live currently. Before them, Italian Black/Death Metal act Mortuary Drape bring their expert horror atmosphere. Alongside are popular German epic doomed metallers Atlantean Kodex and returning Cosmic Death Metal three-piece ZOM.  Also returning from the first ever Live Evil in 2010 are raging Norwegian thrashers Nekromantheon and Finnish Speed Metal maniacs Speedtrap who come in support of their new album.

Live Evil takes over the full venue with the Boston Music Rooms second stage being hosted by the reborn classic Heavy Metal label Music for Nations. The stage hosts new and legendary UK bands including NWOBHM heroes Battleaxe (who’s classic album Burn This Town came out on Music for Nations in 1982) and still London’s still raging Heavy Rock legends Stray who formed in ’66 and had Iron Maiden cover their track ‘All in Your Mind’ on their 1990 single ‘Holy Smoke’. In support are British young bloods Dark Forest, Seven Sisters, Dungeon and one more TBA.

The label comments: “Music for Nations are proud to put their name to the second stage at Live Evil. When we resurrected the label it was important to associate ourselves with the best metal events and they don’t come any better than Live Evil. And the fact that Battleaxe, whose Burn This Town album was released on MFN 30 years ago, are playing the stage makes this especially special.”

As ever, the infamous Friday pre-show will kick things off in a speedy style with a separately ticketed show headlined by returning Swedish death metallers Vampire. In support are German black thrashers Witching Hour, Norwegian Grind act Gouge and Italian chaotic thrashers Krossburst.

As well as all the bands and free after-party’s each night, visitors can expect a full metal market, a courtyard area with cheap food and the best atmosphere in town. Get ready for Heavy Metal Mayhem!

The festival with formed in 2009 for the first three years using Darkthrone’s ‘Band of the Week’ as it’s marker and still considers Fenriz to be the inspiration and a festival mentor. Every year without fail Live Evil’s organisers Marek Steven and Oscar Tuttiett pick the cream of international Heavy Metal scene with many acts going on to big things or career resurgences following their appearances. Live Evil is run and organised by music promoters Marek Steven and Oscar Tuttiett

Live Evil Festival is an International Heavy Metal Festival presenting underground Black Metal, Thrash, Speed, Death, Heavy Metal, Metal Punk and Doom bands from around the world. Inspired by Darkthrone’s ‘Band of the Week’, the acts are picked by Live Evil and the festival is 100% committed to the bands who play it.