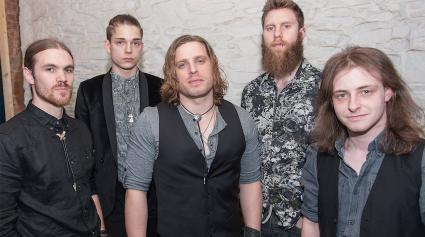 Rising stars of the British rock scene, BLACKWOLF have announced they’ve teamed up with PLEDGEMUSIC for their second album, the follow up to 2014’s debut ‘The Hunt’.

Since its release, the Bristol five piece have toured with The Answer, Winger, Blues Pills, Von Hertzen Brothers and more. And if that wasn’t enough, in association with Planet Rock Radio BlackWolf headlined their first UK tour and were nominated for ‘Best New Band’ at the Classic Rock Magazine Awards.
So where do you go from there?  Frontman Scott Sharp explains “As proud as we are of our debut album, we knew we couldn’t stay on the road forever; we needed to get back into the studio. Producing the second album sooner rather than later was always on the cards.”
Enter TOBY JEPSON. The former Little Angels frontman is no stranger to juggling life on the road and recording/producing critically acclaimed albums (his production credits include The VirginMarys, Toseland, The Answer, Saxon). “I think this new album will enthrall and impress in equal measure. This is a band stepping up and finding themselves. I’m very proud to be involved” says Toby.

“Toby’s really helped shape our perceptions and gain the clarity we needed. What we once thought we should sound like has evolved into what we COULD sound like, which is far more exciting for us and our fans. It’s been a revelation working with the man” summarises Sharp.“Creativity is what music is all about and working with Toby and PledgeMusic is exactly where we need to be right now. It gives us the flexibility to explore beyond normal conventions and bring a legitimate album to market.” 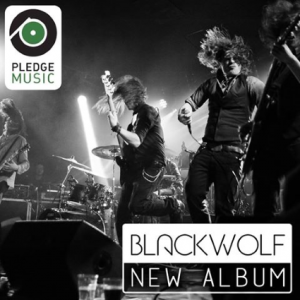 PledgeMusic M.D. PAUL BARTON knows all too well the challenges the music industry faces and they play a major part in championing new artists, giving them the opportunity to present their passion via their ingenuis platforms “‘I’m extremely pleased BlackWolf have joined us at PledgeMusic to bring their exciting new album to the fans!  The band teaming up with Toby Jepson is a match made in rock heaven and I can’t wait to hear the results!  I look forward to watching BlackWolf achieve great things with the new album and I’m proud PledgeMusic can be a part of it all.”

BlackWolf and Toby Jepson are currently recording the as yet untitled second album at Vale Studios. The new release will be mixed by STEPHEN HARRIS (U2, Santana, Kodaline, Kula Shaker) confirming that something special is waiting in the wings.

For now, head over to BlackWolf’s PledgeMusic page to get the latest updates and discover more.
http://www.pledgemusic.com/projects/blackwolfalbum2