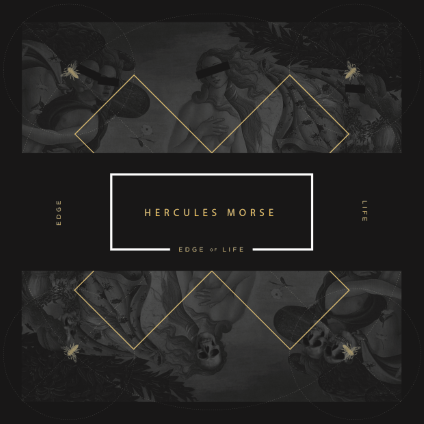 Hercules Morse unleash a bold combination of the groove-based riffs of stoner/desert rock, the energy and audacity of classic British rock and the melodic focus of contemporary alternative rock to create something altogether distinct and highly engaging. The quartet have drawn favourable comparisons to The Foo Fighters and Queens of the Stone Age, but as you peel back the layers, you’ll see that there’s a lot more to this band.

Formed from the ashes of their past incarnation “The Blue Screen Of Death’, Hercules Morse were reborn in 2014 and wasted no time in putting out their debut three track EP and video ‘Edge Of Life’. The record is layered with colossal riffs, thumping bass grooves and alluring guitar work, all woven together by captivating vocal lines. The band’s lyrical content is often tongue-in-cheek, reflecting the foursome’s preference for substance over self-importance. As Rocksound Magazine so aptly stated, “good songs take precedence over trite stylistics”. Their debut record handed the alternate rocksters to a wider audience, lapping up critical acclaim in the process, and crowning the quartet as ‘ones to watch’.

Hercules Morse returned to the studio this year to cut further tracks, and they now repackage their debut EP with three brand new killer cuts. The ‘Edge Of Life’ EP will be nationally unveiled this December, and it’s a real firecracker. The record boasts six slabs of stoner infused alternative-rock underpinned with a potent classic rock vibe, from the deliciously crafty and rock ‘n’ roll swagger of ‘Edge Of Life’, to the compelling QOTSA-esque driving groove of their new single ‘Nowhere Left To Go’. The South Coast rock beasts have cultivated a throbbing bruiser of a debut that will command your attention and ensure that the band take flight. Don’t miss Hercules Morse on tour this Autumn and Winter; stay glued to their Facebook for announcements.