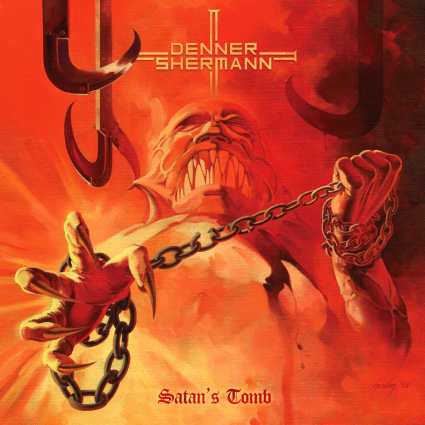 Take a couple of members of Mercyful Fate, a legendary drummer, and you get some classic heavy metal

It’s tempting to just say this: the Sherman here is Hank and the Denner is Michael. The two were the guitarists in Mercyful Fate on the downright classics “Melissa” and “Don’t Break The Oath” records. The drummer they chose is Snowy Shaw from Fate too, but also King Diamond’s solo band and they got in Demonica’s bass player and Cage Evil’s singer to complete the band. So, given that news, the question is: what do you think it’s going to sound like…..?!

It’s tempting, to leave it there, but then, “Satan’s Tomb” (possibly the most heavy metal title of the year) is so good that that it requires some explanation. And the fact is that four songs that make up the record are just about a masterclass in how to construct this type of music.

It even begins with an evil sounding twin guitar solo, before beginning to gallop as vocalist Sean Peck (who does a stunning job throughout) lets out a blood-curdling scream. By its second line “the virgins blood is still wet” and by its chorus “666 must die.” Enough said?

The challenge is to follow this brilliant summation of evil up. They do. And do so very well with the thrasher “War Witch” and all kinds of darkness is unleashed on “New Gods” – the most modern sounding of the songs here – it’s a real power metal slammer.

But what of the eponymous heroes? Well, they are in brilliant form, and there’s a flourish here that rather suggests they have thoroughly enjoyed themselves, but moreover proves they can feed off each other as well as ever.

So in answer to the question posed at the start, it sounds pretty much exactly as you’d expect a record written by these men in 2015 to be. That is to say that it’s trad enough to satisfy all those with the studs still in their denim waistcoats, but equally they are far too savvy to make a boring reboot of the past, or – even worse – a reheating of a recipe they’d cooked before.

Instead “Satan’s Tomb” is just the right side of wicked, and one of the more entertainingly evil releases of 2015.