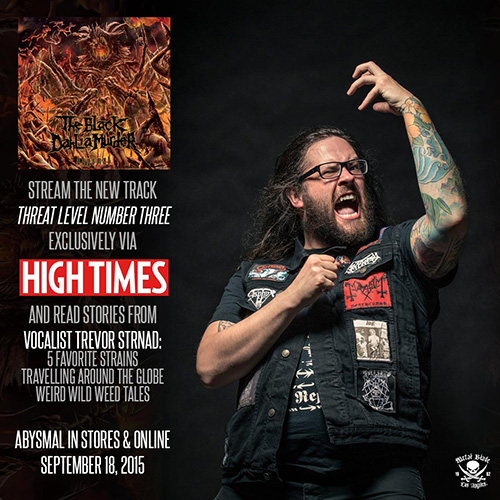 Black Dahlia get high with their friends

It’s very common knowledge that the members of THE BLACK DAHLIA MURDER had a fond appreciation of the cannabis culture, but front-man Trevor Strnad now gives us all a very in-depth look into his favorite strains, best culture spots around the world and why green is good. Also, while you are reading this you can have the band’s vicious new track, “Threat Level No. 3,” as your soundtrack, since it’s also streaming now exclusively on High Times site. The song is off the band’s new full-length album Abysmal, which comes out on September 18th on Metal Blade Records. Check it all out now HERE.

THE BLACK DAHLIA MURDER will return to North America this fall to headline the IndieMerch Tour with Iron Reagan, Harm’s Way and Maruta. The trek will start Oct 3rd and run through Oct 30th and it marks the group’s first official Canadian/US tour supporting their highly anticipated new album. Be sure to either see below or head over tofacebook.com/theblackdahliamurderofficial for all tour dates.

The album’s pre-order bundle packages are available at metalblade.com/tbdm.