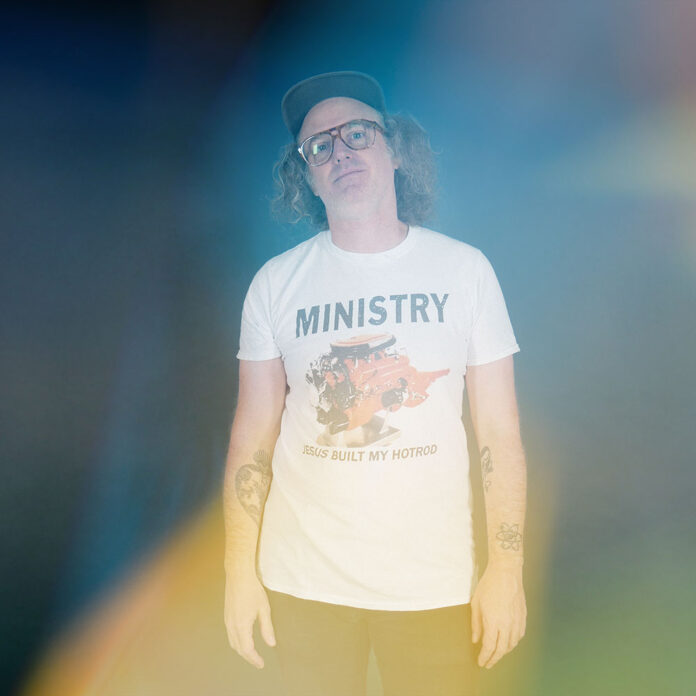 Ulysses Trash is the sophomore album from Australian born, UK based artist Dez Dare. With the pandemic still raging, Dez took a meagre amount of time to buy some new gear and expand his studio. Spending late 2021 writing and recording 18 tracks that delve further into themes of the ethical vacuum of modern capitalism and politics as well as the destructive course of the digital society we live in, that filled the debut album, ‘Hairline Ego Trip’ (4th June 2021).

Ulysses Trash is built on the dichotomy of clarity in the world we are presented, and the sanguine nihilism of accepting your life is without control. Ulysses is a hero. A leader. Ulysses also means the wrathful, the hater. There is a pervasive movement within our leaders who champion destructive behaviour, smiling while destroying all in their path. Presenting themselves as saviour, while smirking and damaging the people they serve. Not only are we lied to by our leaders, but we lie to ourselves. Making justifications that allow us to feel better about our choices. The lies we tell ourselves to survive.

This album is a call to inaction, surely we have to try? An open letter to embrace our place in the ecosystem in which we exist and understand where we fit in the grand scheme. To remember that beauty is in the minutia, the quanta in which we all are made.

‘1.9.8.5.’ is the first taste of the new album. A fuzz beast clawing out of a pit of noise, riffs and existential joy, pulsating with Stooges and Mudhoney blessed garage grit.

Darren on 1.9.8.5. “Religion has always confused me. I was raised Catholic for a while. It wasn’t for me. I find the concept of faith difficult. How to believe in the intangible? The concept of heaven, even more baffling. I remember being asked in school whether I believed, and when I said no, the brother asked whether I wanted to see my family and friends in heaven when I died. This scared the fuck out of me and I said “no, 80 years is more than enough thanks”. We are animals, like all other organic life. We are a part of the entire universe down to the molecular level and reach far into the galaxy and beyond. We have little time before we are absorbed back into the quanta, so we should all take a breath, understand our place and stop hoping for a magical life beyond. Surely being a part of this massive and beautiful cosmos is amazing enough? Do we really need more?”

Dez Dare (aka Darren Smallman of BATTLE WORLDWIDE, Low Transit Industries, Thee Vinyl Creatures, The Sound Platform, Warped) grew up in Geelong, a port city located on Corio Bay and the Barwon River, in the state of Victoria, Australia where he became involved in the local punk and rock scene in 1990, playing in a band called Warped, sharing stages with the likes of 5678s, Fugazi, The Dirty Three and the Hard-ons, going on to play in multiple bands spewing out sludgy punk rock, heavy drone and noisy pop abundance. Darren was embedded in the scene, playing music, running labels (founding record label and touring company Low Transit Industries in 1999 working with bands such as The Essex Green, Lilys, Elf Power, Okkervil River, Of Montreal, Black Mountain, Trans Am and CW Stoneking) before moving to the UK in 2010 where he has operated ever since.

In 2022 Dez will head out on the road for the first time. The live performance will be a multimedia affair, incorporating Dez’s cartoonish and hellish visual aesthetics with fuzz, noise, beats, and more fuzz. See you out and about!