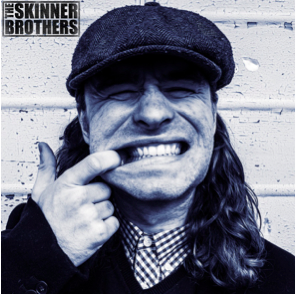 Future Utopia creatively reinvents ‘Stupid Much?’ by putting its focus heavily upon atmospheric alt-pop synths and punchy hip-hop beats. It’s a style which places the song in a fresh context without losing the original’s personality and identity. It’s a completely different sound to what we’ve come to expect from The Skinner Brothers, but it proves to be the perfect fit for Zac Skinner’s topline. The rhythm feels so natural for his vocal phrasing, adding a UK rap feel to his state-of-the-nation lyricism.

Zac says, “I’ve been a fan of what Fraser T Smith does for a while, production work, Future Utopia – all of it – so when he said he’d remix the track we were over the moon – and then I’m going to jump on something for him too.  Remix is a banger – very proud of this one”

The mutual admiration between The Skinner Brothers and Fraser T Smith will continue when Zac provides vocals on a track for the second Future Utopia album. The debut Future Utopia set, 2020’s ’12 Questions’, was praised by The Guardian as being “joyously unpredictable” and featured numerous guests including Dave, Stormzy, Bastille and Tom Grennan.

Fraser T. Smith is the latest in a succession of big names who have hailed The Skinner Brothers’ talents. One of the band’s very first tours came with an invite from Carl Barât to support The Libertines, while more recent shows as guests to Kasabian and The Streets have inspired huge reactions from audiences. Meanwhile, guests on the ‘Soul Boy II’ album included Rob Harvey (The Music), Russ Pritchard (Noel Gallagher’s High Flying Birds, previously of The Zutons), and rapper Teef, who previously collaborated with Tonga (Mike Skinner and Murkage Dave).

At the age of 18, Zac Skinner left home for London with only his guitar for company. Inspired by the likes of The Jam and Frank Carter & The Rattlesnakes, he grinded away, called on some favours, and did everything he could to make the band a reality. As their line-up took shape with Joe Fisher (guitar), Perry Meadowcroft (bass) and Alfie Clayton (drums), they started to rise to the next level with an array of tastemaker tips and airplay across 6 Music and Radio X. They’ve since sold-out two London shows at the 100 Club, and played their biggest headline show to date last night at the O2 Academy Islington.

Expect more to be confirmed on the live front soon. The Skinner Brothers are already confirmed to join a strong bill at The Music’s huge reunion show at Temple Newsam Park in Leeds on June 2nd. They’re then set to perform as guests to The Sherlocks at the O2 Academy Leeds on June 25th.