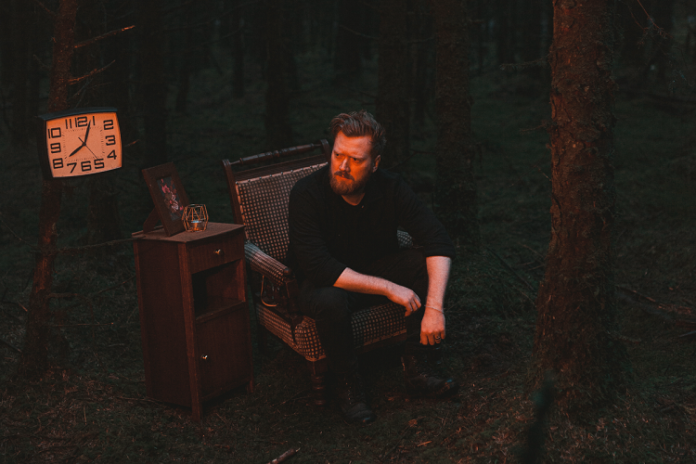 Belfast-based singer-songwriter Gareth Dunlop has just released the title track of his forthcoming new album, ‘Animal’, as a single. The surreal promo video for the song was inspired by an internal monologue about the hang-ups and oddities involved in the songwriting process, which Dunlop explains by stating that “a great piece of advice I once received was to ‘write like no-one will ever hear it.’ It tricks my brain into being more honest with myself than I normally would.”

The clip sees Dunlop walking among his furniture – sofas, beds and fireplaces – scattered in a secluded mountaintop forest. Video director Jamie Neish states: “The song carried a paradoxical quality to it but also had something that felt inherently tribalistic to me, and I guess there was a marriage of all those things to finish the storyboard. The physical scenario was bizarre, bringing living room and bedroom setups into the forest – but it’s a rare chance to make something unusual seem usual, even if it’s just for a few minutes.”

Singer-songwriter and producer Gareth Dunlop was fortunate enough to remain a busy man during the global pandemic. Having established Sycamore Studios in Belfast just prior to lockdown, he was subsequently in a position to record not only his own long-awaited second album, ‘Animal’, but also produce new records by friends and fellow Northern Irish musicians Foy Vance (‘Signs Of Life’, 2021) and Lee Rogers (‘Gameblood’, out spring 2022).

‘Animal’ consists of a diverse set of songs that include the soulful and anthemic ‘Right About Ready’ and ‘Look Back Smiling’, which evoke the ’80s yet exude a timeless quality, the atmospheric ‘Sorrow’ and ‘Prisoner Of My Past’, which both channel late period Roxy Music, the laid-back ’60s dream pop vibe of ‘Humans’, plus a memorable title song that adds an electronic bounce to its subtle groove.

Dunlop, Vance and Rogers will be on tour together in the UK and Ireland at the end of the summer, with confirmed shows as follows:

Vance will headline all dates, with Dunlop on additional duty as a member of his band. A US tour beforehand will take up the entirety of May.