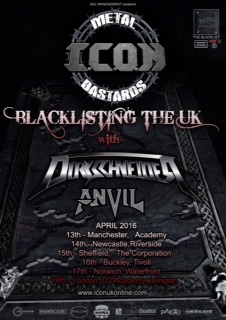 Brit metallers bag support slot
British heavy metal band I.C.O.N will open for U.D.O. Dirkschneider on the UK leg of the current tour. The shows are as follows:
13 April – Manchester, Academy
14 April – Newcastle, Riverside
15 April – Sheffield, The Corporation
16 April – Buckley, Tivoli
17 April – Norwich, Waterfront
19 April – London, O2 Academy Islington
Dirkschneider’s latest tour started in February and has already sold out several venues. Canadian metallers Anvil are main support on the tour until 24 April.
This will be I.C.O.N’s third tour of 2016 so far, having toured the UK in February and about to play six shows in Europe 17-25 March all in continuing support of their second album ‘The Blacklist’, released June 2015 on Metalbox Recordings. The band also toured Europe as Special Guests of Operation: Mindcrime in December 2015.
Check out the links and press quotes below-
Website: www.iconukonline.com