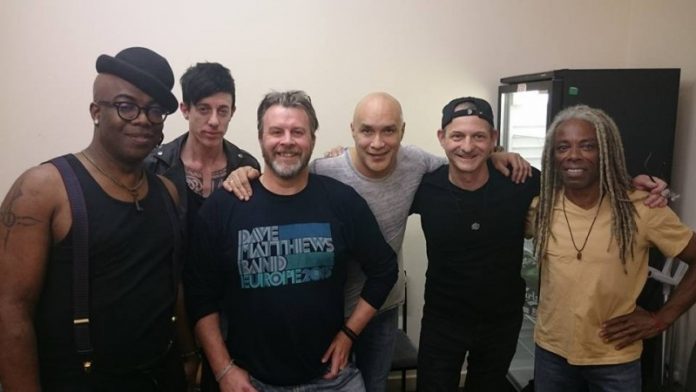 Garry proves good things come to those who wait

Well if you have to rate an evening out on a scale of one to ten….to quote Spinal Tap’s Nigel Tuffnel…..this one goes to eleven!!!!
The return of one of my all time favourite bands is normally occasion enough to make it a great night…..but then to be asked by Dan Reed himself to go onstage and introduce the band makes it a real night to remember.
It’s 26 years since I last saw the DRN live so this was always going to be a great night, it was good to see the venue 3/4 full by the time the band hit the stage at 9.30pm and the crowd were   clearly up for a real good night…..’Under My Skin’ got things underway…..the smiles amongst the band & crowd were visible from the car park and these continued throughout the evening.
The band had a few technical issues….those first night of the tour gremlins always rear their heads….but the band were barely knocked out of their stride and took these slight delays as another chance to interact with the buoyant audience….we had impromptu cover versions, alternative endings, guitar spinning, Kung fu kicks….it was a real spectacle.
We were treated to a fantastic array of tracks from across the three DRN albums including ‘Forgot To Make Her Mine’ ‘Baby Don’t Fade’ ‘Rainbow Child’ ‘Tiger In A Dress’ ‘Stronger Than Steel’ ‘Baby Now I’ and my personal favourite…..the mind blowing ‘Cruise Together’…..most of us in the crowd may be two decades older but the singing & head bobbing that went on continuously throughout the set shows that we know real good music when we hear it…..and the DRN are a real good band…..and to add to an already great evening…..we get a brand new album in May called ‘Fight Another Day’ released through Frontier Records.
Dan & the rest of the band are returning to the UK later in the year in support of the new album….I know I will be attending at least one, maybe two….or three of the dates and judging by the reaction from the crowd they will be too…..it’s fantastic to have these guys back…..my word we have missed them.
Garry Foster
Unchained Tuesday’s 10pm – Midnight
Prog Rock Files Thursday’s 10pm – Midnight
101.8WCR FM & www.wcrfm.com
Previous article
What’s My Name?
Next article
ICON open for Icon’s