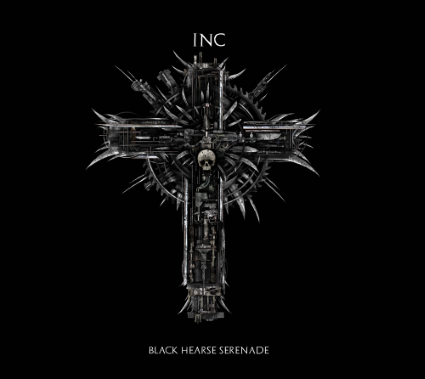 Thrash metal and concept albums aren’t the first things you think of going together. They are all very well for the likes of Dream Theater, Yes or Ayreon, even Springsteen has kind of had a go at it, but thrash? Go on then, we are game.

I N C guitarist Erik Barath had a clear idea of the story of the record when he spoke to MVM recently. The album, he told us, was set in Southern California, about a broken man, his congregation of runaways, junkies and lost souls and a murderous path to finality. A childhood filled with embarrassment and shame, born of religious zealotry and an overbearing mother, that broken child has now become a man.

Those elements are all there, but frankly all the clever story in the world won’t, if you will, make an Appetite For Destruction of a Chinese Democracy. So all that really matters is whether “Black Hearse Serenade” is any good or not. And you best believe it’s a cracker.

Thrash is going through a bit of a fallow period right now, with everything trying it’s hardest to be heavier than thou, sound like Meshuggah, or the true greats of the genre have got to old, too stale or almost embarrassed to thrash anymore, not I N C, though.

From the start – the brilliant opener “Stirring The Flock” – to “Love Like Napalm,” which closes the album in ethereal fashion, “Black Hearse Serenade” is something pretty special.

The great thing about “Serenade” is that it just works on the level of a conventional album. “Cyanide and Whiskey” has a huge chorus to match it’s almost militaristic drumming, a theme continued by its superb title track, which begins with a spoken word piece and then really kicks in like prime Exodus.

There are moments of light and shade here, so the bludgeoning let’s up, say on the likes of “Lucky Number Seven” which, although still clearly rooted in metal, offers something a little different. “Invite This Plague” on the other hand, offers an apocalyptic, nihilistic view: “the night is young, but we are all gonna die,” offers up it’s verse.

“Black Hearse Serenade” is a dark album, as befits it’s subject matter and title, it isn’t one to put on if you want cheering up, but if you want to listen to some thrash metal, like they used to make and like many of us long for, then you could do a lot, lot worse.