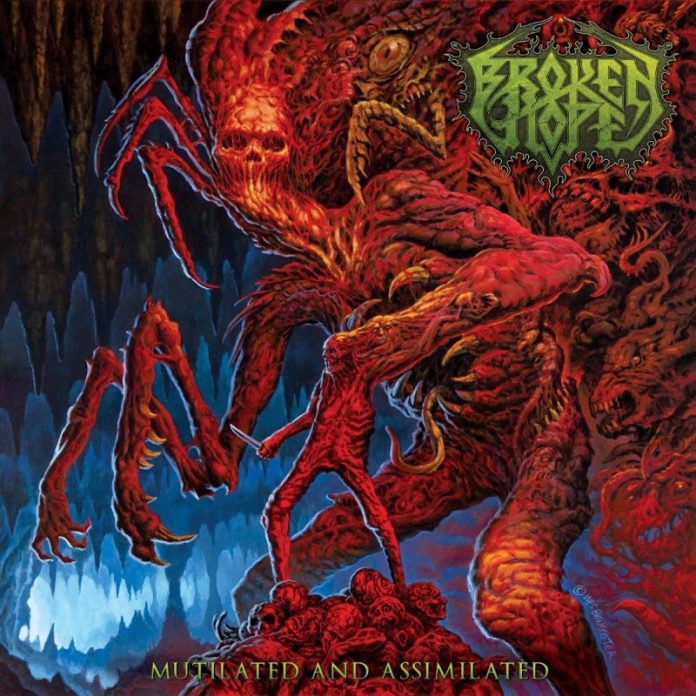 Chicago’s very own conductors of Death Metal brutality, BROKEN HOPE are pleased to announce details of their forthcoming full length album, “Mutilated and Assimilated”, which will see the light of day on Friday June 23rd 2017 via Century Media Records.

Regarding the new album guitarist/lyricist/founding father Jeremy Wagner says:
“BROKEN HOPE studio album number SEVEN?! Un-fucking-believable! I’m floored at how amazing our new album turned out. The songs are relentless and violent and dark and heavy–and ALL from a fresh and ferocious place we haven’t shared before. Moreover, thanks to my new studio and the stellar work of engineering/producing Jedi—Scott Creekmore–the production is on a sonic level like we’ve never had in our career.

Thanks to my brothers: Damian, Mike, Matt, Diego, and Scott–ALL of whom brought their amazing talent and skills not just to the table, but kicked it into the stratosphere! Thank you to Wes Benscoter for collaborating with us to create the epic/sick/THING-inspired album artwork, and a huge thanks to Century Media worldwide for being in our corner with this new album.

For me personally, I feel “Mutilated and Assimilated” is my own finest hour as a guitarist and lyricist since I formed this band as teenager. I’ve never felt this inspired before. The album has my strongest riffage to date, it also has Leski riffage on a few songs, it has my best friends on it, and in a crazy twist, I used Jeff Hanneman’s guitars to write the album with and used them to track with in honor of his influence on myself AND the world of metal.

There’s a LOT going on with this new BH album! I can’t wait for you all to hear “Mutilated and Assimilated”. DEATH METAL forever!”