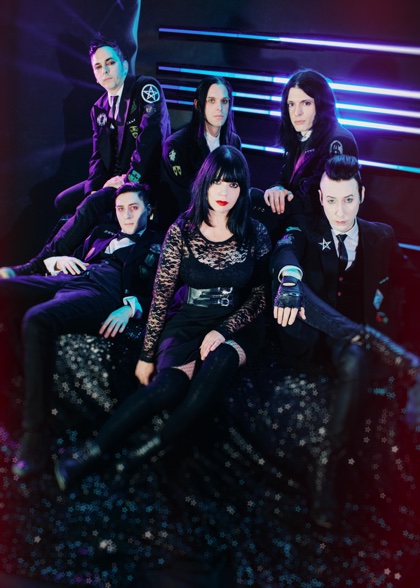 ‘Under Your Spell’ is the 7th album by the Birthday Massacre, and with it comes eleven songs that reveal a side of the Canadian band that audiences may not be familiar with.

Driven with the band’s signature, unique blend of spiralling synth melodies, walls of guitar and evocativevocals, the new songs range from dark, aggressive anthems to danceable, pretty pop and hit all the bases that audiences have come to expect. However, there is also a rawness to theemotion being expressed, an openness and vulnerability that feels new.

One thing that is clearer than ever, however, is the tight bond that exists between the band
members and their willingness to explore heartbreak and loss together. With these songs,
they have entered the darkness of their most fragile emotions and returned with a cohesive
and detailed musical portrait that captures both the anger and hope that exist within a
moment in time.

The Birthday Massacre continue to make music that is so very unique to them. Once again,
they have managed to create an album that somehow feels so familiar, yet challenges the
listener to continue alongside them on their ever-changing, ever-growing journey.

Originally formed in the early 00’s in Ontario, Canada by frontwoman Chibi and guitarists
Rainbow and Falcore, TBM initially self-produced and released an album entitled ‘Nothing
and Nowhere’ plus an EP, ‘Violet’, backing these up with well received live shows that
brought the band to the attention of Metropolis Records. Signed by the label in 2005, new
songs were added to the latter and it was reissued as a full album, with a promo video for a
song entitled ‘Blue’ being commissioned that displayed the band’s penchant for mixing
themes of horror and tragedy with fun and satire to create a unique visual experience.

It was also at this time that TBM chose the colour violet for all their subsequent artwork,
stating that “Violet is the colour of the tragic comedy. We associate it with fantasy and
melancholy. These themes make up much of the band’s lyrical inspiration. The colour also
mirrors our sound dynamic. Our music mixes contrasting elements. In turn, violet is the sum of two contrasting colours: Red and Blue.”

The next TBM album, 2007’s ‘Walking With Strangers’, was co-produced by the band with
Dave ‘Rave’ Ogilvie, who continues to work with them to this day. The veteran producer of
acts such as NIN, Marilyn Manson and Skinny Puppy used his magic touch to help refine
and expand onthe group’s signature sound. The record was well received and the band
toured successfully in North America withlabelmates Mindless Self Indulgence and also
played a number of hi-profile European shows. The intensity of their live performances
was captured on film in Hamburg and subsequently became TBM’s first live CD and DVD,
‘Show And Tell’.

The autumn of 2010 saw the release of a fourth studio album, ‘Pins And Needles’, which
was described in one review as ‘a deliciously dark slice of guitar driven goth rock that
could single- handedly soundtrack the entire Tim Burton filmography.’ It was preceded by a
video for opening cut ‘In The Dark’ that paid homage to ‘A Nightmare On Elm Street’ and
‘Legend’, as well as a slew of other horror and fantasy movies. TBM subsequently
promoted the album via a co-headlining North American tour with Black Veil Brides.

Their next release, ‘Hide & Seek’, was issued in 2014 and became TBM’s first Billboard
chart record. Described by Kerrang! as a ‘shot of playfully synth-drenched psychodrama’,
it drew comparisons to the likes of NIN, Lacuna Coil and Depeche Mode in its
wide-ranging sound palette.

The band’s 2014 album ‘Superstition’ was a release that brought together all of TBM’s
themes and experiences into the most intriguing yet accessible record in the band’s history.
Celebrating the devotion of their ever increasing fan base whilst simultaneously
demonstrating their ability to surprise the casual listener, sold out UK tours in 2015 and
2016 were testament to their continuing drawing power.

2016 also saw TBM dig deep into their past and release a collection of songs recorded
under their original moniker of ‘Imagica’. Lovingly remastered from original 4 track
recordings, ‘Imagica’ stands as a historical document of the early days of the band’s
career, and a thank you to all the loyal fans who demanded the release of this material.