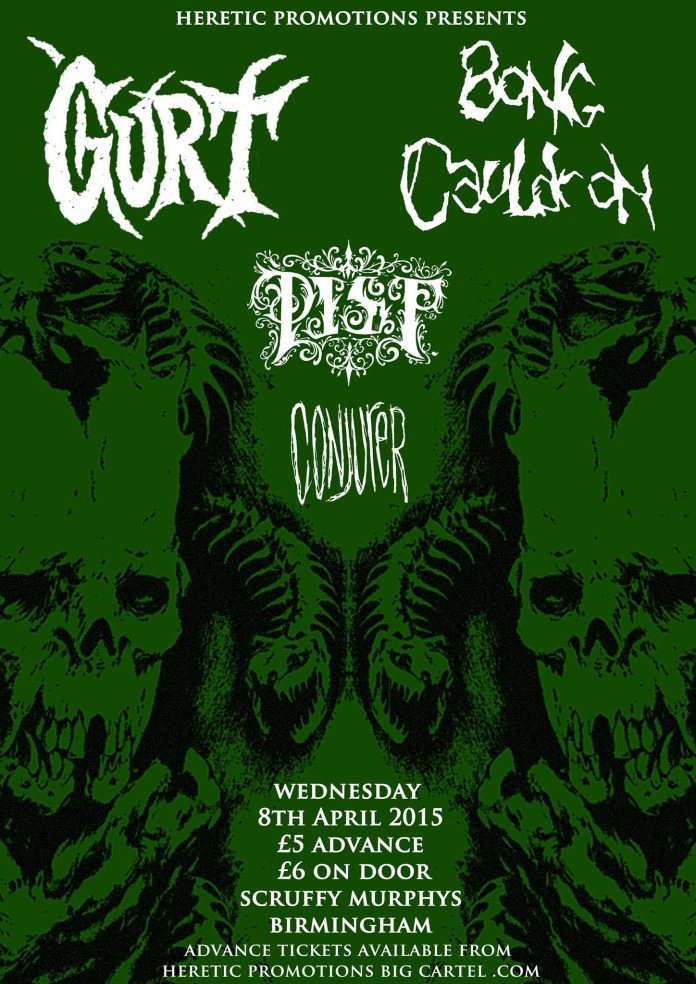 By any measure you like Conjurer’s rise has been rapid. A little over two months after their first gig the Midlands quartet are able to impress just about everyone who hears them. They are through to the semis of Metal To The Masses and all the evidence is that they are just a little bit special. Superb musicianship is a given, as is a wall of thick, sludgy goodness and a watertight rhythm section, while the dual vocalist approach gives their recipe a real interesting twist. The only thing left to do really is get on board. Conjurer are ….magic (sorry!)

Pist are, well….pissed. Or more accurately at least a couple of their number are. Singer Dave wants to see things get more physical: “You! Not clapping at the back, I’ll fight ya!” He offers mid-set, before matters do threaten to get hairy when someone takes liberties with their offer of a swig of whiskey. The thing is, though, you wouldn’t want Bury’s branch of this unholy trinity any other way. Arguably the North West’s finest purveyors of filth, they too are making their second visit to these parts in a couple of months. Then, they were rather concerned as to whether we liked Black Pudding (you probably had to be there….) tonight they are all about Donner Meat and chips. They also feel naughty, apparently, which is a scary thought. Lucky then that their music is here to take our minds off the quality of porn on their tour bus. Perched somewhere in-between full on stoner, dirty rock n roll, punk and sheer drunken abandon, songs like “Gutter Slut” (as charming as it sounds) slam. They end with their eponymous track and like always they spend their half an hour teetering on the edge, with that glorious feeling that it could all fall apart at a moments notice. They’ve got the riffs, they’ve got the grooves, they are Pist and they are superb.

“Pist, man, compared to us, those guys are angels….” And that is just Leeds’ Bong Cauldron laying down the ground rules, so imagine what the rest is like. BG are no stranger to the second city either. Literally or sonically. First, they play here a lot and second because their downtuned snarl owes much to the band who invented a musical genre about two miles from this basement. In the  Cauldron pot is a gloriously putrid mix of metal. At times its like being thumped by one man while another beats you with a lump of concrete and a third steals your wallet. They’ve got a new EP out and amongst other things are here to play songs from it, some are fast, some are slower but all are absolutely stone cold brutal. And, happily, that’s all they’ll ever be, which means everything is just fine, thanks. “Gimp Jig” closes their set like sandpaper to the balls. It’s heaviness of gargantuan proportions. Bong Cauldron are a mighty brew.

They might promise “herbal tea and cuddly toys,” but Gurt haven’t come all this way to be outdone for heaviness. They have proved over the years that they are a force to be reckoned with and here the Londoners threaten to flatten the place with their sheer weight. Like Down and early Mastodon operating a wrecking ball for kicks Gurt smash all before them. Older material like “Shell” is pleasingly unrefined, while the newer stuff is, if anything, heavier still. “We don’t fuck about so let’s get on with it” explains singer Gareth Kelly and this no frills approach permeates everything Gurt do. This is just hands down headbanging fun. They add a new one from the EP they released last week and it’s possible that “Scrump” is the best of their lot here, with its slow deliberate destructive intent. At other times they do something more hardcore “Sludge Puppies” from their “Horrendersarus” record notable in this respect, but this is no less effective.

The bottom line to all this is quite simple: you can sit all round all day stroking your beard and debating the rights and wrongs and superficiality of music in 2015, but sometimes all you need is four real bands playing warts and all and a shitload of pounding riffs through the skull like a boot to the face. That’s why the Filthy Three tour exists and that’s why tonight was so brilliant.