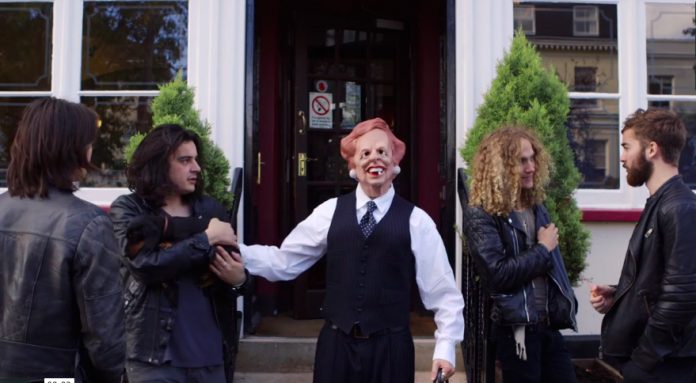 Had Marc Bolan and Joe Strummer fathered a child it might have sounded a bit like Chinese Missy. Trashy and raw rock n’ roll with a smattering of political comment, this is a guitar band which aims to make both your feet and mind move.

Chinese Missy are a four piece band from London, playing a unique brand of trashy rock n’ roll. Since forming in 2012, they’ve had a lot to say for themselves. Last summer saw them take to the stage at Download Festival, backed by Red Bull Studios London. They also released their debut single, Kickin’ About, and the accompanying video, which reached No. 20 in the iTunes rock chart and has received airplay on BBC Introducing.

Their new single, titled Blood On Your Hands, is due for release 20th April to coincide with the general election. The single comes complete with a tongue in cheek politically motivated satirical video, check it out below!

Chinese Missy have this to say:

If you cross Thatcher with Blair, what do you get? The world going down the toilet! Which is where you find our current crop of politicians, grooving with Chinese Missy! Given the stagnant nature of music and politics, ‘Blood on Yours Hands’ is here to shake up both voters and listeners!