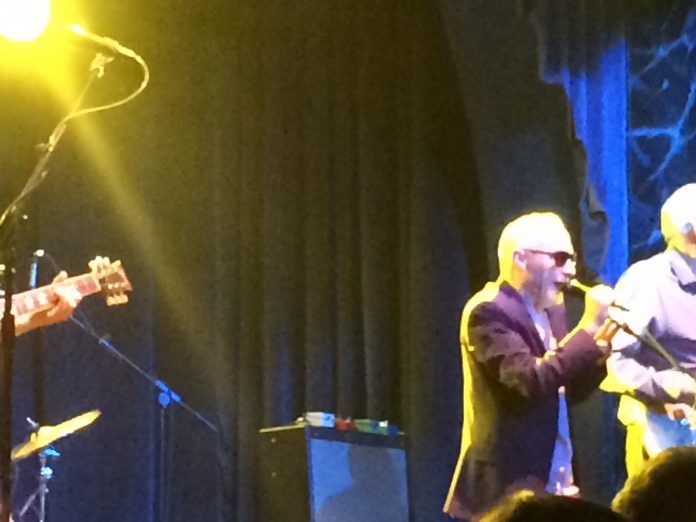 GP is back for one final time. Was it what the doctor ordered?

It’s the oldest trick in the book. The Farewell Tour. Everyone knows, usually it’s a con and the band will be back next year, next decade, whenever. With Graham Parker and the Rumour, you get the feeling that it might be different, it might be actually it.

When they returned with their first album for 31 years (“these guys had plenty of money, they didn’t need to anything, I had to carry on making records” jokes the dry witted and occasionally acerbic Parker onstage) – 2014’s wonderful “Three Chords Good”, and followed that up with “Mystery Glue” a year later, it looked as they were back in the groove – at least until the news came out just before the tour that this was the end.

As such there is a palpable crackle in the air as the five men that make up The Rumour and the eponymous frontman take the stage at 9pm precisely. For the next 95 minutes they proceed to show why they’ve endured so long and why they’ll be so missed if it really is over.

Right from the get-go this is a very neat, well thought out melding of the new and the old. It makes that obvious as the soulful “White Honey” – the very first song on the bands very first album 39 years ago – gives way to the “Stop Crying About The Rain”, a cut from 2014, and that very much sets the pattern for the evening.

For every old classic – “Watch The Moon Come Down”, “Howling Wind” for example – there’s a new track too, “Pub Crawl” (which includes a Kazoo solo if you please) and the barroom of blues “Railroad Spikes” from “……Honey” are worthy additions here.

The band are in top form too, guitarists Brinsley Schwarz and Martin Belmont are the perfect foils for each other and have lost none of their ability to trade licks, and Bob Andrews tops the thing off with some brilliant organ and keyboard work.

Then there’s Parker himself. Still compelling, still possessing a distinctive and excellent voice, and still evidently very much his own man. He’s also a mighty fine songwriter, the US took to him as a kind of Brit Springsteen in the 1970s and it’s easy to see why, the characters in “Watch The Moon Come Down” and the scope in the lyrics would surely draw comparisons still.

The end of the show does become a kind of Greatest Hits. “Protection” is quintessential Brit rock and roll, “Local Girls” ushers in a sing along and the encore which follows includes a real highlight in “Hey Lord, Don’t Ask Me Questions” before the last song this band will play in the Midlands saw a joyous “Soul Shoes”.

That was wonderful and a fitting conclusion, but the real heart of the matter had come a little earlier. “A Long Emotional Ride” seemed to sum up or just the show, but the wider career of the band in general.

If this is the end of the touring road, it was quite a way to go.