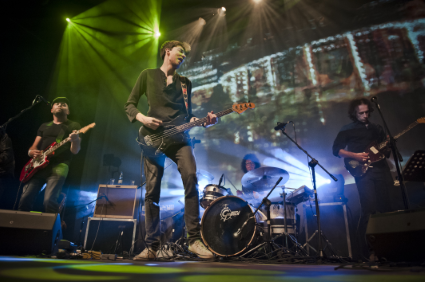 Despite the fact that celebrated shoegaze pioneers RIDE are in the midst of their world tour, you can now hear the sweet vocals and guitar of frontman Mark Gardener on the latest single from Pure Phase Ensemble 4. ‘Morning Rise’ is the first single from the album Pure Phase Ensemble 4 feat. Mark Gardener ‘Live at SpaceFest!’, the first long-play featuring Gardener in RIDE’s celebrated style to have been released since the 90s. The video for ‘Morning Rise’ is premiering in Northern Transmissions.
Pure Phase Ensemble is an international music collective, created especially for the SpaceFest festival in Gdansk, which takes place annually in December and is organised by the Nasiono Association. The city of Gdansk plays host to this blossoming music festival each year in the first week of December, at which time numerous select musicians from Poland and abroad gather to take part in a special workshop series. They collectively compose a concert’s worth of music, which they then present live to the festival-goers. Each year, this unique performance is recorded live and subsequently released as an LP.
The programme for each workshop is jointly directed by Ray Dickaty, a British saxophonist improviser and former member of Spiritualized(1997-2002), and Karol Schwarz (KSAS), who also manages Nasiono Records. Along with these two key figures, a new musical curator – a legendary, internationally recognised musician – is invited to co-curate the workshop held at every festival.

“For me, this is interesting – it’s perfect because it reminds me in some ways of how some of the early Ride songs came together… I didn’t come in with a script, nor does Ray. There is no pre-work on this. It was just completely spontaneous,” explains Mark Gardener. “Sometimes music like that is good before things get thought about too much and worked on too much. That can kill the energy sometimes. Of course some things have got to be worked and developed, but in this scenario, with such little time and to get an interesting set together, I think it’s been good to keep it fresh and not over-worked.”

“The way we’ve arranged the music – for me, it starts off in a certain mood and goes through a tremendous amount of emotions and then returns to the familiar mood we started with at the beginning. It’s a perfect circle of music,” says Ray Dickaty.

Most recently, Pure Phase Ensemble 4 and Mark Gardener have teamed up with Canadian-Ukrainian dreampop duo Ummagma to create anexclusive radio edit for another of the LP’s lead tracks ‘Happy Dancing Woman’.