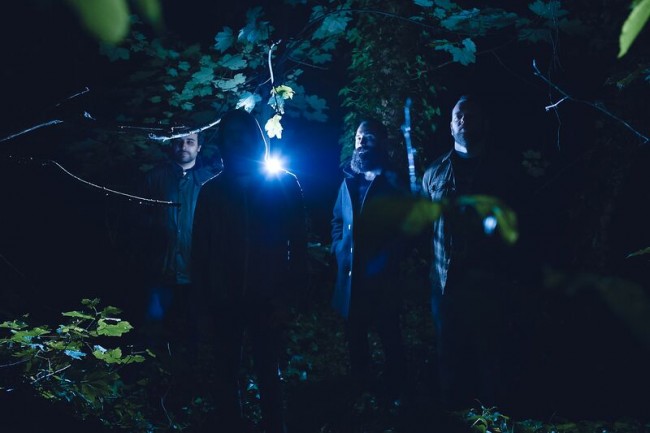 From around 2005 – 2010 Leeds had one of the most vibrant DIY hardcore/metal scenes in the UK with Humanfly, Chickenhawk, Whores Whores Whores, Narcosis, Year of the Man, The Plight, Red Stars Parade, Bilge Pump, Gentleman’s Pistols and Send More Paramedics playing week in, week out alongside regular visitors to the city such as Bossk, Taint and Manatees.

While the majority of these acts broke-up years ago, many have gone on to form newer bands creating a whole host of exciting new heavy music within Yorkshire. One of those is False Flags, formed out of the ashes of Red Stars Parade, Whores x 3 and Year of the Man they are set to self-release their new mini-album ‘Hexmachine’ on 20th November.

Guitarist Charles Pritchard comments, ‘after the break-ups of our previous bands in Leeds and all previously being friends from the DIY scene here, we wanted to form a band that took influence more from the noise rock / dischordant hardcore end of the spectrum.’

Taking inspiration from the likes of Unsane, Breather Resist, Botch and Coalesce, False Flags have slowly but carefully crafted out a 6 track debut mini-album of abrasive, disjointed but solid rock titled ‘Hexmachine’. This is the sort of hard-hitting music that has led them sharing stages over the past few years alongside Noothgrush, Narrows and Envy while Thrash Hits referred to them as, ‘among the most brilliantly fierce new acts we’ve heard’.

The lyrics remain relatively obscure with a focus more on creating images or ideas rather than having any cohesive themes to them. As the band comment, ‘they’re not political or anything. At the serious end I guess you’ve got stuff like religion in there, but some of it is just supposed to be quite humorous – ‘Pet Wolf’ is about frontman Jenko’s chihuahuas so when you see him screaming, bear in mind he’s screaming about chihuahuas. And then think that he’s grown adult man with 3 kids….’