Giving It The Big A and M 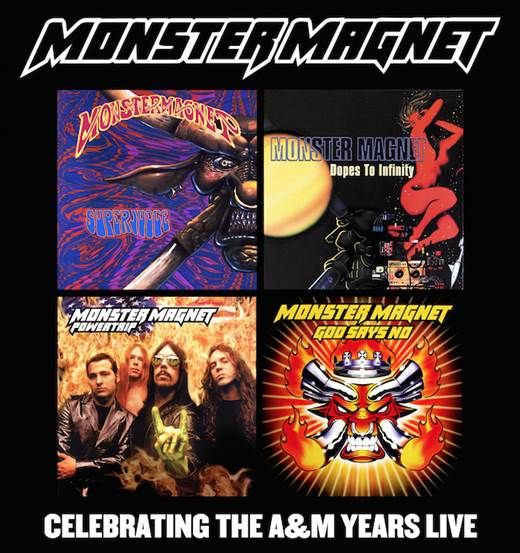 MONSTER MAGNET will return to Europe next March for a live celebration of their decade on A & M records. A& M released four albums from Monster Magnet between 1993 – 2003, including their commercial breakthrough ‘Powertrip’, and albums Superjudge, ‘God Says No’, and ‘Dopes To Infinity’.

The dates include a UK performance at the London Forum on Saturday 19th March 2016.

Says Dave Wyndorf: “Hey hey! We’re happy to be touring the A&M albums and hope to get into some deep cuts as well as the more obvious crowd pleasers. A lot of these songs have never been performed live and that makes it exciting for us and hopefully you too! Rock on.”

To coincide with the tour, on Feb. 12, 2016 Spinefarm Records/UMG will be releasing newly remastered versions of the classic A&M albums “Superjudge”, “Dopes To Infinity”, “Powertrip” and “God Says No” with loads of bonus audio and new liner notes written in conjunction with Dave Wyndorf. Each album will be released on 2LP and 2CD – with at least one LP side of bonus material, and the second CD of each set containing only bonus content.