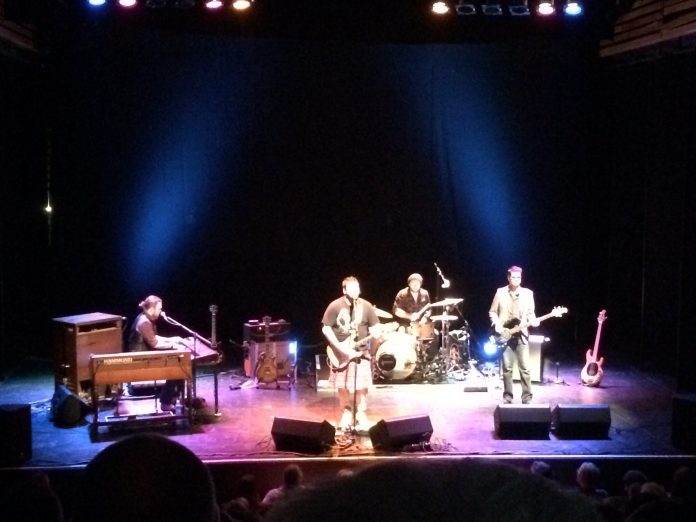 
It almost seems trite now, we’ve said it so many times, but Britain has a staggering amount of young blues talent. Ben Poole is another to add to the ever growing list. The southern native is equally adept at bluesy bluster, such as “Somebody Is Lying” as he is at making his guitar gently weep. Best of all here is “Time Might Never Come” dedicated to – and with hints of – Gary Moore, it gives Poole the chance to show his prodigious talents to fine effect. Time is on his side, and you imagine that the man who at still in his mid-twenties has drawn praise from the likes of Jeff Beck and Bernie Torme will only get better. That he’s this good already makes that a rather mouth watering prospect.

The four guys who stroll on without a care in the world a little later on, look – and this is meant as a compliment – completely normal. The type of blokes that you’d imagine you could go to the pub with and have a chat about music. It’s just that they also happen to be four highly skilled and highly decorated musicians who are probably the finest blues rock band in Britain right now.

Alan Nimmo and the rest of King King (and make no mistake about it, this is a band, one which is superb throughout) have sometime recently, gone from being a name to drop in blues circles, to being genuine crossover stars. They’ve never played Bromsgrove before and yet the sold-out signs are up and it’s been the same everywhere they go.

The reasons for it? Well, and forgive us for being simplistic perhaps, but is it just as simple as good, honest talent coupled with good, honest hard work pays off in the end? Is that allowed in the modern age of instant gratification and needing to go viral to succeed? No matter whether it’s allowed or not, it’s what King King are doing every time they go out onstage.

For almost an hour and three quarters here they are pretty much unstoppable. They are that band, the one that knows they are ready. Much of this is down to their brilliant 2015 record “Reaching For The Light”. A body of work that rather moved them away from traditional blues to rock, and just about everything in-between. The show tonight might start with “Lose Control”, a song not on that album but much of it is. And whether it’s “Rush Hour” or the Cream-ish “Crazy” – which has been picked up by Planet Rock – the more tender stuff like the gorgeous “Lay With Me” or the heartfelt “You Stopped The Rain”, dedicated here to Nimmo’s brother Steve and his fight with cancer, it’s all magnificent.

Nimmo possesses a natural Glaswegian charm to go with his incredible ability to write songs and play them. An engaging character, he retains the air of a man who knows how lucky he is – talking about being scared to see Jimmy Page the night before at the Classic Rock awards (“it’s a good job I wasn’t wearing my kilt, they’d have seen the pee running down my leg” he jokes)  – and being very clearly genuine when he says how much it means to him to see people come to watch his band.

Perhaps people respond because King King love the music they play, and are steeped in the history of the genre too, covering The Fabulous Thunderbirds “Wait On Time” – topped off here with brilliant Organ work from Bob Fridzema – and an emotional rendition of Frankie Miller’s “Jealousy”.

It’s another of “…..Light’s” songs which ends things. “Stranger To Love” is one of the more bluesy tunes on the album and Nimmo takes the opportunity to deliver a brilliant solo during it, but there’s an encore (they are rock stars now, after all!) and the funky “Let Love In” turns into a real party atmosphere singalong – no mean feat in what was ostensibly an all seated venue.

But then it was that kind of a night, they are that kind of a band. King King are on the verge of a huge breakthrough. Tonight was the start of their victory lap.

Previous article
Giving It The Big A and M
Next article
Featured Band: Stella Lost