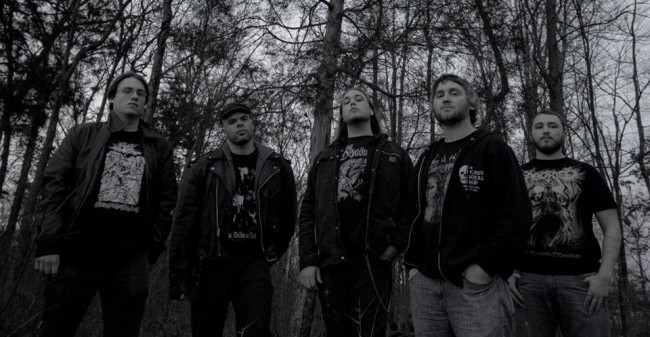 Everything you need to know about the new Grethor record

“Cloaked In Decay” takes both traditional and Avant-Garde Black Metal and fuses it with a chaotic barrage of dark Death Metal riffs, laced with hooks and grooves. This five track EP offers GRETHOR’s most diverse, compelling release yet, complete with crushing Doom riffs, high-octane blasting and bleak melodic passages. With “Cloaked In Decay”, GRETHOR is aiming beyond the confines of its genre to create music that is as heavy as it is provocative; music that will stay with you as much as assault the senses.

Virginia Black/Death metal band GRETHOR has recently completed their follow-up to its debut EP, 2013’s “GALAXIA INFINITUM”.  “CLOAKED IN DECAY” will be released April 21, 2015 Independently and will be released as a jewel case CD, with lyrics and color artwork, and for digital download on various online retailers including Bandcamp, iTunes, Spotify, and Amazon Music. The EP’s lyrics are inspired by the 1895 novel “The King in Yellow” by Robert W. Chambers: a series of short stories, of which four of them are about the eponymous forbidden play that spurs despair and insanity to those who read it.  “Cloaked In Decay” also warns of the ills of religion, man’s existential crises and cosmic horror.

“I find that fear is possibly the most harmful of human traits,” said GRETHOR vocalist Marcus Lawrence. “It is, however, a great source of material, and it is through art we confront it. It is our only salvation.”

Artwork for this EP was created by Niklas Sundin. Best known as the guitarist of melodic death metal band DARK TRANQUILLITY, Sundin is also a renowned illustrator and graphic designer.