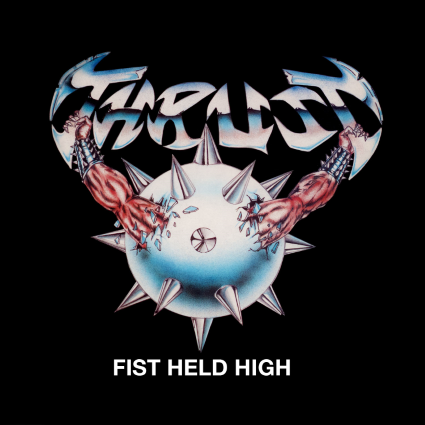 Originally released in 1984  “Fist Held High” is seen by most as Thrust’s definitive statement. It sees the Chicago amedly adhering to – and cheerfully joining in with – just about every heavy Heavy Metal stereotype there is. So they deal in dungeons and dragons,  they praise Satan, they kick the shit out of everything else, and lastly – on the song of the same name – assure us that “Posers Will Die.”

It’s easy to see why “…..High” was so popular when it was released 31 years ago. Listening to it now it is uproarious fun of the highest leather clad order. There is an innocence about songs like “Metallic Attack” and “Heavier Than Hell” that reflects not only a different time in metal’s evolution, but also Thrust’s own youthful exuberance.

“Thrasher” is self explanatory and thumps appropriately, and you probably don’t want to delve too deeply into “Torture Chamber” although the song does have a phenomenal galloping riff.

All of which adds up to a collection that stands up to the test of time rather better than you might originally think.

The other re-issue in this celebration of their 35th anniversary isn’t actually a reissue at all. “Reincarnation” is an album that was originally recorded in the late 1980s with legendary producer Bob Kullick but which never actually saw the light of day.

Like “Fist Held High,” “Reincarnation” is a product of its time. It lacks the sheer ebullience of the earlier record, and carries all the hallmarks of an album from those times. “Scream Girl Scream” bares a resemblance to Skid Row’s “Makin’ A Mess” and where “….High” seethed with anger, this collection is an attempt at something a little more mature. “God Only Knows” is a huge power ballad, and “Wasted” does a nice line in a Maiden-esque hook.

At it’s best, on the crunchy “Hypocrite” for example “Reincarnation” hints that it too could have had it’s moment in the sun given the chance, but there are too many moments like “Get Crazy” that are all filler and not enough killer for “Reincarnation” to truly match up.

These being reissues and all, both discs add extras, with some live stuff on “Fist Held High” and some demos on “Reincarnation.” These are for completists only, but make for a handy document for long time fans.

The rest of us should just raise our devil horns to the sky and play “Fist Held High” loud.