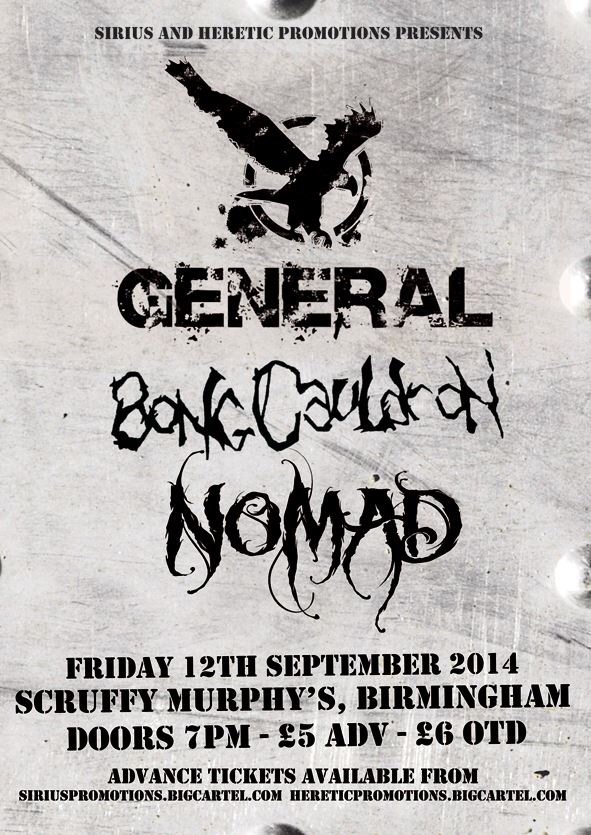 What is it about three piece bands? How do they do it? Opening tonight there are another one in Hung On Horns who are just gargantuan. The Bournemouth trio deal in massive great walls of sound which reverberate around Scruffys from the second the come on. What makes them mighty effective though, is the huge riffs are juxtaposed with some quieter sections and the songs get chance to breathe and find their way to places that you wouldn’t necessarily expect them to go to. Not quite metal, not quite stoner but instead a glorious mish-mash of all things heavy. Their six song set, including a magnificent “Black Widow” marks them out as a real find.

Nomad by contrast have a different approach. They intend to beat you into submission. Slowly. Indeed, when the Manchester band have finished beating you, they begin pummeling for good measure. The point being that this is sludge, it’s thick and it’s heavy and somehow fits perfectly here. Nomad – and Bong Cauldron who follow them tonight – are currently playing their “Fuck The South” tour, and London’s loss is very much our gain. There is plenty of groove here and the whole thing is a riff-tastic joy. Last song “Burn The Water” is best of all. Think Dopethrone. Think Gurt. Think about buying Nomad’s record, and certainly try and see them live.

The other half of the tour that suggests the South is rather unimportant is promising “coma inducing oppressive riffs.” Bong Cauldron do not disappoint. Leeds’ very own purveyors of doomy filth deliver a set which is choc full of that and then some. The band sum up their philosophy, thus: Born, got pissed, played riffs, will eventually die. And that type of attitude serves them well. Another three piece outfit, BC are monstrous throughout. They add elements of thrash to the doomy mix to great effect, and are arguably the heaviest thing on so far. Man mountain frontman Biscuit (MV is sure we heard someone call him Ryan….) kicks out the down-tuned jams, one of which sounds a little like “Iron Man,” but let’s be honest no one here is hiding a love for Sabbath. Where Nomad journeyed here to beat you slowly, Bong Cauldron do it even slower. And smash you with a brick. Subtle it is not. Brilliant it most certainly is. Seemingly only playing about five songs in their 45 minute set – and one of them is marvellously called “Piss Blizzard” – BC don’t trouble themselves to much with subtlety and light and shade. This is just relentless.

Coventry’s General first came to prominence when the manager of a band called Clutch – you know, one of the finest bands on the planet – saw a video on YouTube and invited them tour. There are worse strokes of luck.

With brilliant debut record “Where Are Your Gods Now?” Under their belts they set about playing those shows and impressing everyone – MAXIMUM VOLUME included – in the process. Now ready(ish) to stick out album number two, General are playing a much changed set. Six new songs are included in their hour tonight. Happily all are superb. They kick off with one of them, “Required To Inspire,” which, whether by accident or design, is probably the heaviest song they play.

Elsewhere there are stoner elements to what General do, but that only tells part of the tale, because rather than sludge, there are times when there is a kind of 90’s post grunge feel to things. Singer Graham has a voice that on occasion is reminiscent of Chris Cornell’s howl circa “Badmotorfinger” and he gets to use his full range on “All Who See,” a song he reckons “takes its time but gets there in the end,” he’s not wrong as it has a very pleasing kick to finish, while “Underground” might be dismissed as the “dancing one” but in practice it has the same kind of driving, thumping intentions as Monster Magnet. The pick of the new songs, though, is the audacious “Well, Well, Well” which clocks in at over ten minutes, and along the way twists, turns and meanders into something quite glorious.

General don’t forget the “……God’s Now” album, however and air two songs from it (a third is cut due to time constraints). “Bullet Train” appropriately rattles along and “Better Dead” sounds as good as ever.

“What a brilliant night,” smiles Graham, about halfway through the set. “What a shame we had to close it.” Self depreciation be damned. It was a brilliant night, and underground metal proved yet again just how many fantastic bands we have, but General were worthy headliners and appear to be a band ready to come into their own.