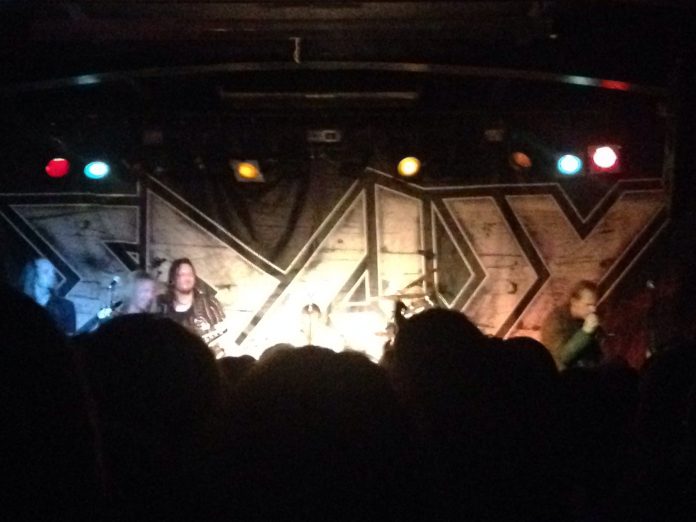 If rock is dead as Robert Plant claimed this week, then no one told Skarlett Riot. Scunthorpe’s finest are rock n roll the way it used to be, right down to singer Scarlett’s occasional American accent. “Rock N Roll Queen” drips sleaze, while “House Of Cards,” a new track they air tonight, is built around a metal riff that is more than passable. The focal point is the aforementioned frontwoman who does a fine and confident job throughout. Like a kinda trash metal band updated for the 21st century Riot know all the tricks, up to and including splitting the crowd in two for a screaming contest. A new album is due next year and Skarlett Riot are close to causing a major disturbance.

Buckinghamshire’s The Wild Lies are here for a party. They inform us of this before their second song. The young foursome have clearly been raised on classic Brit hard rock of the Def Leppard variety. “Falling” could have come straight off “Pyromania” for example. They ask for devil horns for one song in particular which is a notch up in heaviness. The band released their EP “Jacks Out Of The Box” last year and appear to be quite promising. Their last song sees them find some Black Crowes type swagger from somewhere as singer Matt gets the assembled throng to scream “You’re A Magpie,” with the confidence of a band that has gone down well.

“Good Evening Nuneaton, we have come all the way from Germany…..and we’ve come in peace this time.” Clearly Edguy main man Tobias Sammet didn’t get the memo about not mentioning the war. He then follows up with this magnificent rejoinder: “I’d never heard of Nuneaton before yesterday, we are from Fulda and that’s the Nuneaton of Germany – and that’s not meant as a compliment!!” To be fair he could have asked the crowd to offer up their first born in sacrifice at this point and got a cheer, such is the worship the band receive tonight. The place is packed by the time Tobias and his mates come onstage. The show has been sold out for a while. The band could have no doubt played bigger venues. Edguy, you see are one of those bands that are more well known than they are seem. Huge on the continent, they obviously a rabid following here too, given that there are people who are literally screaming the words to opening song “Love Tyger” along with Sammet. The fact that they aren’t bothering arenas in the UK is a little odd given the quite obvious debt their sound has to NWOBHM. Pair of openers “…..Tyger” and “Space Police” are both on new album “Space Police: Defenders Of The Crown” and the duo are both almost perfect heavy, power metal.

An indication of how gloriously over the top things are comes when a piano turns up for “England” a huge, great power ballad that namechecks Steve Harris, Bruce Dickinson, Bob Catley (who performs in Avantasia with Tobias and is here tonight) and penalty shoot-outs. Serious it is not. We are not in the realm of po-faced, Teutonic efficiency here. Better still is “Defenders Of The Cross” all thumping, Dio fantasies, combined with Priest and Maidenisms, even including a snippet of “Running Free” for good measure.

There’s a drum solo (naturally!) before the band return for “Ministry Of Saints” and their absolutely ludicrous cover of “Rock Me Amadeus.” In other hands, at another gig, this would be awful, here it is so ridiculous it works.

“Tears Of A Mandrake” ends things (“we are playing this song then we are going to London because there are more people going to the show tomorrow” says the ever helpful singer) and when they do come back the encore contains more of the same – and what else did you expect? – including a quite magnificent “King Of Fools.”

Tonight for 90 OTT tumultuous minutes, Edguy were superb and captured the very essence of what power metal is all about. They don’t need MV to tell them though, as Tobias’ puts it. “Nuneaton, you were good….but I was brilliant.”

Don’t you just hate it when Germans are right?

Previous article
Get Your Lyrics Recorded By Top Prog Band Machines Dream
Next article
Let Battle Commence! The Crusade Is Back This Christmas