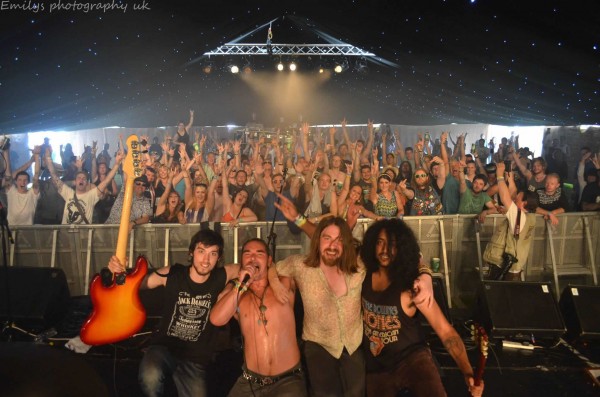 As a kid your humble correspondent had a serious glam rock thing going on. It started with mega selling US groups like Poison, Cinderella and Warrant. All those type of bands were great when you were 14 growing up in the suburbs. The kids listening to that sort of music didn’t know the sense of rebellion was all a little fake and homogenised, we really did think the DJ thought that love was a game of easy come and easy go.

Then things got just a little seedier. The more you delved into rock n roll’s underbelly (and other nether regions come to that) you found things like Jetboy, like Love/Hate and like Johnny Crash, bands who gave the impression that while you were watching those giants of the genre, they’d be out the back giving one to your girlfriend – and they’d send you the Polaroids to prove it (no such thing as mobile phones then kids!)

So it is with the current hard rock revival. If Blackwolf and Buffalo Summer are the current clean cut kings of swagger then Hammerjack are the ones getting pissed in the car park with their mates and not giving a shit.

When we were saw the Guildford band the other week singer Sharpy had just spent a night in the cells, and this five track demo (which you can pick up for free on their website, or at one of their gigs) is so dripping in sleaze that you can almost smell it.

It’s 18 and a half hedonistic minutes begin with the line “you show me yours and I’ll show you mine” on “Cards And Whiskey,” while “Bring It” is basically a statement of intent. “You’ve Got It” adds a little Mick and Keef swagger, but best of all is “Stupid Things” built around some Bon Scott era AC/DC and a big ol’ chorus. Closing track “Good Woman” is written from the standpoint of a load of geezers who want any woman, but definitely not a good one – and it’s bluesy groove works here, and the AC/DC homage continues with it’s key line: “I want to push my love into you.” Enough said?

Let’s be honest, it’s not original in any shape or form, but that pre-supposes that the band don’t know that. What it is, is full of youthful enthusiasm and nasty intent, which means that all is well in the sleaze rock world. The band only formed last year and you can expect more from them, but this is a decent want to start.

Damn good fun, but don’t trust them around the woman of your dreams…..