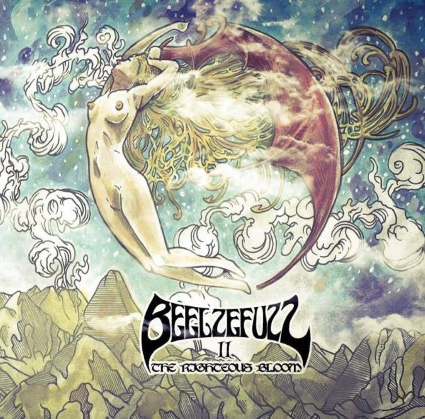 BEELZEFUZZ today confirms August 19 as the North American release date for their second album, titled The Righteous Bloom.  The album will be the first by the four-piece to be distributed nationally via Restricted Release/Abstract Distribution.  Produced by the band with Richard Whittaker (Skullflower), it features original artwork by illustrator David Paul Seymour (Red Fang, Graveyard).  To celebrate, The Obelisk is now streaming the album’s opening song, “Nazriff.”

Discussing the new song/album, vocalist Dana Ortt notes, “I think ‘Nazriff’ shows off our more traditional rockin’ Uriah Heep and Nazareth influences musically.  We wanted to have a lead off track that featured most of the elements of what we do and we feel the song fits that description.  We think the mixes by Richard Whittaker turned out great and we are really looking forward to doing shows and supporting the album this summer.””

Revealed as a Psycho Las Vegas performer alongside an incredible collection of artists, BEELZEFUZZ will kick off their push for the album’s American release with their first show since last autumn at Pittsburgh’s Smiling Moose on June 4.  Psycho Las Vegas co-curator Sean “Pellet” Pelletier reveals, “Beelzefuzz may not be the band you traveled to see, but there’s a strong chance they’ll be one of the bands with you when you leave.  When you curate a festival with dozens of acts, quality is a must but so is uniqueness.  I picked them because I know that their poignantly melodic, dead heavy swan songs are sure to turn heads at the chatty bar in the back.”  Drummer Darin McCloskey says, “I’m not sure if we’re more excited to play or just be there!  This is the most amazing line-up of bands I’ve ever seen together… anywhere.  We feel very fortunate to be a part of it and one thing’s for sure – we’ll be in great company.”

Formed in 2009, BEELZEFUZZ’s heavy rock found an immediate regional following.  Shortly after the release of a 4-song demo in 2010, the band signed with Germany’s The Church Within and released their full length in 2013.  Ave Noctum called the self-titled album, “addictive… Beelzefuzz are one of many going down the old retro route and shaking their doomflare to the sounds of the bygone past yet wrapping it up in their own inimitable style.  This lot are fun in every sense of the word.”   BEELZEFUZZ features members of Pale Divine, Falcon, and Revelation.

European release of The Righteous Bloom will be via The Church Within; specific release information to follow shortly.