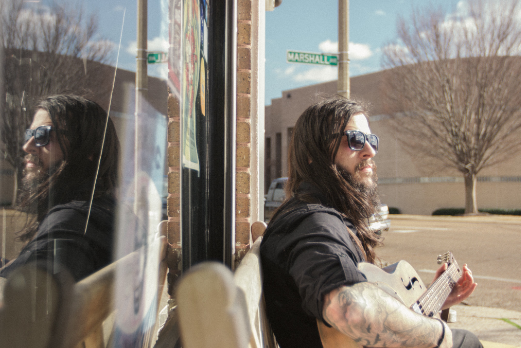 MV approved artist is back in June

Shawn James announces his new solo album titled, On The Shoulders of Giants, set for June 17th street date. Pre-sales for all formats including digital, CD and vinyl LP begins on May 7th. James himself states “I’m more excited about releasing this album than any record I’ve ever put out.”

At Sun Studios James absorbed the energy radiating from the very rooms in which greats like Howlin’ Wolf, Elvis, Johnny Cash, B.B. King, Grace Potter & The Nocturnals, and Justin Townes Earle all recorded before him. He wears his influences on his sleeve explaining “where I grew up, on the South side of Chicago, and at my church, it was all about gospel and soul music. Artists like Son House, Robert Johnson, Otis Redding, Howlin’ Wolf. I’ve always wanted to write and record an album of original music dedicated to that style. At the end of last year, I began writing and came up with nine dark blues, storytelling songs that I felt could pay homage to the greats. I booked Sun Studio in Memphis because of the vintage recording gear and rich musical history. I knocked out the tracking in just three hours.”

He describes the sound of the new album saying “you can find elements of haunting folk, dark raw blues, and powerful soul in my music. I feel like my solo material has a certain unique groove and sway to it similar to a lot of hip hop and rap artists I admire. I fuse elements of all kinds of music into something powerful, and I hope, unique.”
“I’ve been singing since before I can remember,” James states, explaining how he cultivated his signature, vocal roar. “I grew up singing in gospel churches. It’s there that I really “cut my teeth” and learned how to harness my voice. Throughout middle school I was trained in opera, orchestra and choir. In high school, I started playing guitar, piano and trumpet as well.” Even though it seems obvious that his main instrument is his incredible voice it should be noted that he is also an accomplished guitarist (endorsed by esteemed Texas resonator guitar builder, Republic) as well being able to hold his own on kick drum and tambourine (as he does performing as a one-man-band) as well as on piano, trumpet, and musical saw.
On The Shoulders of Giants, features Shawn James on vocals, guitar, kick drum and tambourine. The nine tracks on the album are 1. “Hellhound,” 2. “Belly of the Beast,” 3. “When it Rains it Pours,” 4. “Snake Eyes,” 5. “Delilah,” 6. “Back Down,” 7. “Lift Us Up,” 8. “Captain Stormalong,” and 9. “Preacher Foretold.” Album credits include Curry Weber as recording engineer (North Mississippi Allstars, Gin Blossoms, Yo Gotti, Huey Lewis & The News) and Kevin Nix as mastering engineer (Stevie Ray Vaughn, Huey Lewis & The News, Wiz Kalifa, Mississippi Mass Choir, Bobby Rush, Three 6 Mafia). The record will be available via CD Baby and Bandcamp.
National touring is confirmed for March, May and June with more tours planned through the end of the year. Beginning in March, James will open select dates for the Shapeshifters, his swampy blues rock’n’metal band. The Chicago native is currently based in Fayetteville, AR.
SHAWN JAMES AND THE SHAPESHIFTERS Tour Itinerary:
Thursday, March 3rd at The Vanguard Tulsa in Tulsa, OK
Friday, March 4th at Caves Lounge in Arlington, TX
Saturday, March 5th at Leftwoods in Amarillo, TX
Monday, March 7th at Mesa Music Hall in El Paso, TX
Tuesday, March 8th at Last Exit Live in Phoenix, AZ
Thursday, March 10th at The Mint LA in Los Angeles, CA
Friday, March 11th in Alex’s Bar in Long Beach, CA
Saturday, March 12th at The Hood Bar & Pizza in Palm Desert, CA
Sunday, March 13th at Soda Bar in San Diego, CA
Tuesday, March 15th at The Western Cafe & Bar in Cloudcroft, NM
Thursday, March 17th at St. Patty’s day Party at Blackthorn Pizza & Pub in Joplin, MO
Friday, March 18th at Lucky’s Everyday in Wichita, KS
Saturday, March 19th at The Smoke & Barrel Tavern in Fayetteville, AR
Saturday, April 16th at Rites of Spring Festival at Vino’s (w/The Shapeshifters) in Little Rock, AR
Sunday, April 17th at Rites of Spring Festival at Vino’s (solo) in Little Rock, AR
Saturday, April 23rd at Norman Music Festival in Norman, OK
Saturday, May 28th at Westport Roots Festival in Kansas City, MO
Shawn James can be found online at:
shawnjamesmusic.com
facebook.com/ShawnJamesSoul
twitter.com/ShawnJamesMusic
youtube.com/ShawnJamesSoul
ShawnJamesSoul.bandcamp.com