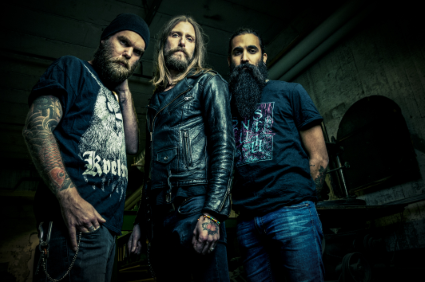 You need no academic background to be a fan of Swedish death´n`roll band Jesus Chrüsler Supercar. The trio’s ferocious songs, their thoroughly uninhibited mix of rock, punk and the odd reference to doom, thrash and death metal get straight to the point, while their messages are as unmistakable as they are haunting and their approach knows only one motto: full speed ahead! 35 Supersonic is the band’s second album and is oriented even more rigorously to their dynamic live sound than their 2013 debut Among The Ruins And Desolate Lands. Drummer Nicke refers to the creation of the new release as the “result of almost panicked songwriting as the time factor was hanging over us like the sword of Damocles.” The furious outcome seems to justify their approach. Jesus Chrüsler Supercar have transported their irresistible live qualities even more authentically to their current album and are set to turn the tables again soon because their feverish power rock releases even more rock´n`roll testosterone at their live shows.

35 Supersonic sounds like a sonic tour de force, keeping the pedal to the metal right up to the last exit. When the three musicians Robban Bergeskans (vocals, bass), Fredrik Karnell (guitars) and Nicke Forsberg (drums) kick off without much ado with their opener ´Let It Roll`, followed by the no less dynamic ´From Hell` (which is also the first single/video to be released from the album) and go on to roll out the heavy doom artillery on ´I Can Get It`, they’ve got the blood boiling in their listeners’ veins. In addition, the band members help themselves to cool stylistic means: low guitars, supported by Fuzz and Overdrive pedals, irresistible grooves and laid-back lyrics. “Robban sings about the madness that we encounter every day,” Forsberg explains and admits that Jesus Chrüsler Supercar’s lyrics occasionally deal with alleged demons, Satan and evil spirits. “But,” adds the drummer, “we only flirt with the devil, that’s all.” Those lyrics are complemented perfectly by Bergeskan’s rigorous, consciously distorted lead vocals which lend the songs their urgency.

Talking of which: the lasting effect of the new album is on the one hand due to the band’s uncompromising songwriting and on the other to its dynamic production. For the second time since Among The Ruins And Desolate Lands, studio legend Tomas Skogsberg (Hellacopters, Entombed) produced Jesus Chrüsler Supercar’s songs at his renownedSunlight Studios in Stockholm. For the Swedish trio, Skogsberg is a real godsend. “We immediately got on like a house on fire with Tomas,” Forsberg remembers. “He reacted to our first two demo songs straight away, asking us to write ten more tracks for a debut album as soon as possible. And this time it was Tomas again who got the best out of us with his enthusiasm and great commitment.”

There’s no reason to hide the fact that guitarist Fredrik Karnell left the band on cordial terms soon after the recordings, but his departure has not affected this band’s great energy. Karnell has been replaced byChristopher Siren (ex-Assblaster), whose musical temperament is nothing short of his predecessor’s. Forsberg: “We’re looking forward to performing the 35 Supersonic material live on stage with Christopher.” And when are those live shows set to take place? As soon as possible, of course! A short release tour has been scheduled for April 2016, followed by performances at as many summer festivals as possible and a major tour in autumn. Definitely a band to watch out for!