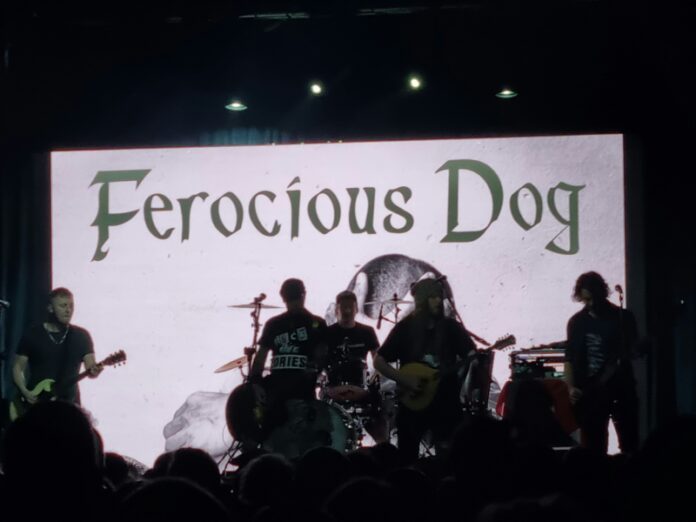 About halfway through their set tonight, Ferocious Dog play “Punk Police”. A vicious condemnation of the “people who sit at home on the tinterweb” says Ken Bonsall, the band’s singer, “telling us we can’t be punk. We are, we’ve got an electric guitar.”

Ken does this while clad in a t-shirt that proudly proclaims: “Fuck The Tories” and what follows is two and a half minutes of what can only be described as punk rock.

Rewind three and a half years, and one of the last occasions I saw them was at a Cambridgeshire folk festival. They’d headlined the Saturday night and their fans had – for perhaps the only time in the history of the event in the shadow of Ely Cathedral, created a moshpit.

That night, as I’d walked out of the tent, two fellas had been engaged in a conversation as to whether they were “folk or not”.

So yeah not folk, not punk, but both at the same time? Business as usual then.

Except it’s not. Not quite at any rate. Dan Booth, Ken’s right hand man for the decade since the band became focussed on their cause isn’t here for personal reasons, and seeing them without their fiddle player is odd (we wish Dan and his family well).

The band have changed since the Autumn of 2019 when last we saw them, opening for The Wildhearts, Kyle Peters is back (“he was on the debut album and we lost him down the back of the sofa” jokes Bonsall) and Sam Wood is in. This appears to be crucial, given that, during the course of the evening he plays every instrument you can imagine from Accordion, to flute, to guitar and all with a consummate skill.

Then there’s the not inconsiderable new album. “The Hope”. Released in 2021, they play a lot of it. More Celtic infused, perhaps more folk (that word again) than their recent stuff, “Haul Away Joe” – its opening track – performs that role here too, and “Pentrich Rising” (an almost East Midlands take on type of thing that Seth Lakeman does so well in the South West), a superb “Victims” and a poignant “Broken Soldier” are all from it too.

The latter, in a way, underscores the night. The history of the band is centred around a tragic incident involving a soldier he (and the others) are never forgotten here. The interesting thing about it all is that everyone watching knows. FD, are a little like Marillion, a band that people are invested in, one they support like a football team. It makes for a unique atmosphere. One that one minute sees Ken read out his birthday dedications to the “Hell Hounds” (not just a song here, but the name for their fans), the next, thunder through “Sea Shepherd”, their tribute to the ocean conservationists.

They have some truly wonderful stuff in their back catalogue too. Whether its “Slayed The Traveller”, delivered with such passion,  “Khatyn” a true story from their new album, or “Spin” from a few ago the quality is evident. But somewhere in the midst of the awful scenes in the channel and worse reaction to them as the spread of populism has made racism seem acceptable, the words in the latter: “As the country embraces/The hatred of Tories” seem to hang heavy in the air.

What they’ve always understood, though, is the need for fun, so they nip back to the debut for a tremendous “Paddy On The Railway” and the their speeded up version of “The Parting Glass”, and smiles on faces are the order of the day.

Fittingly, though for a band that means more to many people than mere music, the end of the show is sort of an encapsulation of it all. “The Hope” – replete with its wonderful harmonies – acts as a sort of beacon, before “Gallows Justice” is one of their more historical takes and as they always do, they end with a brilliant “Slow Motion Suicide”. “That was Thatcher’s 80s” sings Ken, the problem is that it isn’t. It’s 2022 and we’ve been failed for decades. That’s why this song resonates so much, I suppose.

But, we can’t dwell, that’s the message here. Even if the collections for Foodbanks (something FD have always done) are a stark reminder that times are tough. Instead, The Toy Dolls version of “Nelly The Elephant” plays as Ken Bonsall dances around the stage before meeting the fans. Moreover, they’re his friends too. That can’t be ignored when it comes to Ferocious Dog, and it makes them unlike any other band.

This is the last night of this tour. The next one, whenever it is, will be the same, because Ferocious Dog are not just a one off, but arguably the best at what they do at the same time. Just don’t try and categorise it, for goodness’ sake.