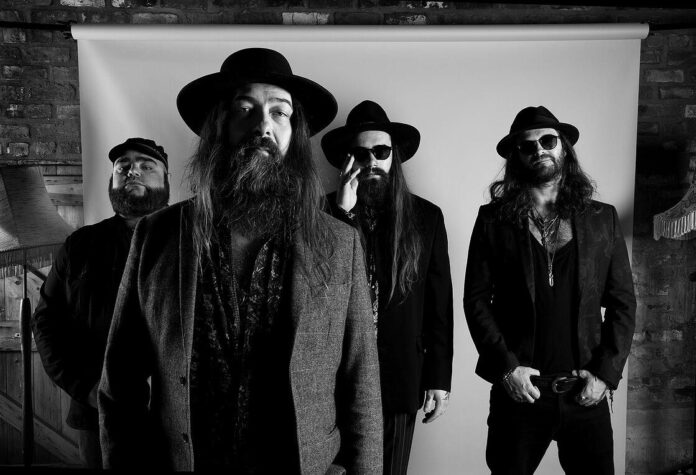 Rising Derby rockers These Wicked Rivers have announced that they will be taking their trademark blues-rock sound and new age stage-show across the UK next March as part of their ‘Calm Before The Storm’ tour. They will perform at some of their favourite venues in Cardiff, Gravesend, Nottingham, Huddersfield, Galashiels and Blackpool.

The announcement follows a hugely successful year for the band, having played standout shows at Steelhouse and Stonedead Festivals, as well winning over new fans night after night during their 23 date Autumn tour supporting Hayseed Dixie. In between touring commitments they have been busy in the studio working on the follow up to their critically acclaimed debut album ‘Eden’, due for release early 2023.

“We’re a band that live to play live; anybody that’s seen us can testify that we give everything in that moment. We had such a wonderful time spreading our message of love and light on tour with Hayseed Dixie, as soon as we recovered we began planning how to get on the road again. The ‘Calm Before the Storm Tour’ is aptly named as will be an opportunity for people to hear songs from album 2 played live before its release. We’re so excited for this album and would like as many members of the family as possible to come out and be a part of the storm. See you there.”

“We’ve handpicked some of our favourite UK venues and can’t wait to share the ‘Rivers headline experience with the ever growing Family of fans.”

The band have also shared a new recording of fan-favourite bluesy-rock anthem ‘Testify’ which will feature on the new record. The original version of the track was recorded for an early EP, but has since been taken to the next level thanks to the addition of harmonica, organ and vocal harmonies along with slicker production.

With new music currently being road-tested at live shows be sure to catch the band at one of the following dates next March:

The band will also be playing their final show of 2022 on 17th December at the RPM Rock n Roll Christmas Party at The Alhambra in Morecambe alongside Massive Wagons (acoustic), Laurence Jones, The Hot Damn! and Bastette.