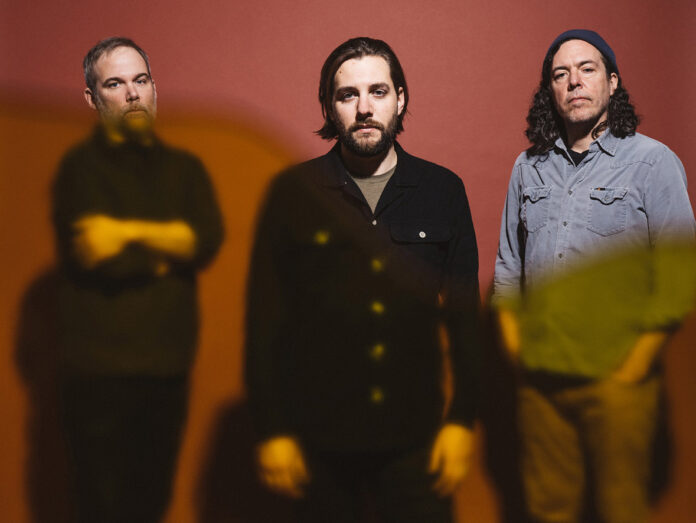 Spartan Records proudly presents a collective sum of historic parts. Roadside Monument. Traindodge. Raft of Dead Monkeys. The creative forces that shaped so many formative and fan-adored records have rematerialized and reassembled as Calm Collapse, a heavy and melodic trio taking cues from a perfect storm of prior projects but decidedly exploring a new and dedicated direction.

Featuring a roster of indie rock nobility, Calm Collapse is comprised of Doug Lorig (Roadside Monument Patrol, Raft of Dead Monkeys) on guitar/vocals, Rob Smith (Traindodge, Museum of Light) on drums/keys, and Jon Pease (Medicine Bows) on bass. After meeting at a show in Seattle, Lorig and Smith began to build the framework for what would ultimately become the band’s debut record, Mirrored Nature. “From the early days we documented and cataloged almost every riff, song idea, arrangement, tweak, etc., iterating through so many changes to create a finalized version of these songs,” says Pease, who solidified the band’s lineup shortly after its inception. “Everything that is heard on this record is extremely intentional. Not to say that we didn’t experiment or have happy accidents in the recording process. But we combed through and dissected all of our parts to craft something with intention.” The sonic result is driving, angsty, and propulsive, but still open and spacious. The grind of Melvins, the melodic discernment of Chavez, and the ethereal tendencies of Grails and Black Mountain.

With so much experience and groundwork laid with previous projects, a guiding force for Calm Collapse was continuing to chart familiar waters, but in a new and fresh direction. “For me, the last couple of bands that I’ve been in have generally been more heavy than other previous projects I’ve done. But with this project, I didn’t want it to be one-dimensional,” says Lorig. “It’s generally the kind of music that I’ve been writing for years. Songwriting has always been a tedious process for me. I generally write in bunches but with long lapses in between, so some of these songs or parts have been kicking around for several years — I just needed the right couple of guys to be able to finally flesh these ideas out.” Smith adds, “[Doug’s] ideas are by and large more rhythmically and harmonically complex than my other bands, so sometimes he needs to just play them for a while before I can find a way in. It can be weeks of messing with an idea before it takes the shape of a song.” The result of this project is a propulsive and heavy listening experience, punctuated by memorable melodies and cinematic and ambient arrangements. “Even though a lot of our album is on the heavier side, we did not want to trap ourselves in,” says Lorig. “The album goes in several directions — we did not want to follow the common things that heavy bands seem to do. We all had a common goal to write songs that had movement and took us places.”

In order to bring Mirrored Nature to life, the band brought in acclaimed producer Matt Bayles (Mastodon, Foxing, Isis) to help execute the vision. “We knew for our music to come across convincingly that the record had to be produced at a higher level. This is why we went with Matt Bayles. I have worked with Matt on a previous couple other projects over the years, so I knew what we were going to be getting. I can say that it definitely was not the easiest thing I’ve ever done — quite the contrast, it was probably the hardest record that I’ve done, but the end product is everything that I had hoped it would be. It sounds huge and expansive,” says Lorig. “Matt definitely challenged us to a high standard during the production phase, but it paid off in a huge way,” says Pease. “I think because we were so invested and prepared to craft this record, Matt stepped up to meet us there. He really put in a lot of care and detail in the recording, mixing, and production phases that makes this record sound as great as it does.”

With time comes perspective, and even after a number storied releases, tours, and iterations, Calm Collapse represents another evolution for the trio. A chance to disassemble the artistic past, evaluate what worked, and reassemble with a new perspective. “It has been my passion since I was a little kid to create music,” says Lorig, “and that passion still lives on to this day as I’ve gotten older. I still love the process of creating, recording, and playing music live. Part of it also has been that I feel I can always one-up the last project that I was in. [Mirrored Nature] is probably my proudest achievement — but I’m definitely looking forward to trying to get even better on the next record.”