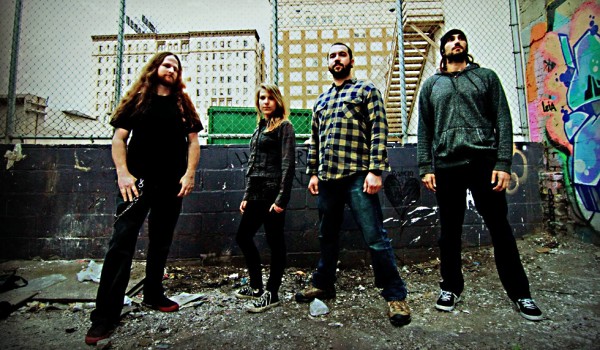 Ex Skinlab bod is back with a new project

When Gary Wendt discovered he was actually living next to a supposed haunted house he named his new band THE GHOST NEXT DOOR. Gary met Seanan Gridley andSean Haeberman, on bass and drums respectively, after the two friends transplanted themselves in Berkeley from central California. Sean and Seanan left their hometown to experience the storied Bay Area music scene firsthand. Gary grew up in that scene, with bands like Fang playing literally in his back yard and taking lessons from Joe Satriani.

Performing around California for a few years, developing their musical chemistry they played a few opening slots at the legendary Fillmore in San Francisco, but they never found their niche and disbanded. Gary persisted and decided to finish work on a recording already in progress. He bought all the requisite equipment, learned how to use ProTools and with the help of some friends, most notably Steve “Snake” Green (Skrew/Skinlab), he recorded and mixed THE GHOST NEXT DOOR‘s debut album.

With the record in the can, Gary set out to reform the band with his go-to bassist, Seanan and two other transplants, guitarist Aaron Asghari from Sacramento and drummer Paula Sisson from Remagen, Germany. The band has been tirelessly gigging, sharing the stage with celebrated, as well as up and coming acts: DRI and Dr. Know,SpiralArms featuring Forbidden‘s Craig Locicero, and Comes with the Fall featuring Alice in Chains‘ William DuVall. Live, they come together to show what manifests from an undeniable compulsion to create and perform their expressive take on modern metal.

THE GHOST NEXT DOOR are: