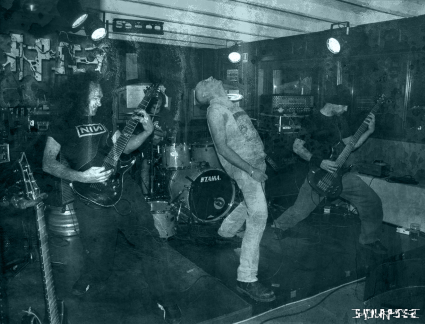 Italian tech deathsters have just released their new one. Here’s everything up to now

Synapses was formed in the winter of 2008 in Brescia (ITALY) after the dissolution of the band Underhate in 2008. At the end of that experience, Ciulaz, Kane and Sez decided to start a new project with the entrance of Cannibale, whom is the current drummer. This artistic union developed the idea of creating modern, violent and frenetic death metal, which has its roots in the 90’s, but with the awareness of a more modern sound. The lyrics are introspective and they delve into the dark abyss that we all have, with reflections on humanity, evolution, and religious or political repression.

After the release of their first promo (2009) (recorded at Fear Studio in Ravenna (ITALY)  with artwork by Lorenzo Fantetti) Synapses brought their mayhem to the live stage as supporter to a plethora of international bands.

In 2012 the debut album ‘EXPIATION’ (Deepsend Records) was released with a good response from critics and fans alike. The artwork was entrusted to Remy C. Headsplit Design (Whitechapel, Six Feet Under, Misery Index,Cryptopsy…) The release was followed by a promotional tour in Europe and a few dates in Italy.

In 2014 the band wrote their second album ‘DEVOUTNESS’: recorded, arranged, mixed and mastered by the band and the guitarist Alessio Fassoli.
The artwork in this case was completed by Colin Marks Rain Song Design(Jeff Loomis, Origin, Kataklysm, Aborted…).

Synapses is an excellent mix of modern technical death metal with an old school mindset and appeal.