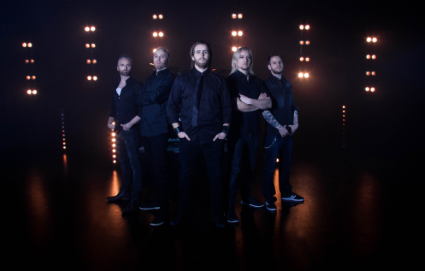 Pyramaze was founded by guitarist Michael Kammeyer in 2002, with the intention of creating an epic melodic metal band from scratch. The original line-up also consisted of Niels Kvist on bass, Lance King on vocals, and remaining current members Morten Gade Sørensen on drums and keyboardist Jonah W. respectively. This line-up saw the release of the first two Pyramaze albums “Melancholy Beast” (2004) and “Legend of the Bone Carver.” (2006) Lead guitarist Toke Skjønnemand joined the band in time to record the “Legend of the Bone Carver” album.

Following the release of “Immortal”, Matt Barlow left and returned to Iced Earth. He was briefly replaced by Urban Breed for the band’s Danish tour with Volbeat in 2008. Several line-up changes occurred in 2008, including the departure of Kammeyer, Kvist, and Urban Breed.

Marking the dawn of a new era for the band, fourth album “Disciples Of The Sun” is a true creative and artistic venture for Pyramaze. With song writing being divided amongst members Jacob, Toke, and Jonah this time around, there is an undeniable diversity and freshness to the sound.  Heavy, dark, progressive, melodic, and catchy, Pyramaze beckons listeners to “Set out to catch the fire!”

Heavy and full guitar riffs, complemented by the epic and cinematic keyboard arrangements of Jonah W, along with the blistering infusion of foundational energy provided by drummer Morten Gade Sørensen, all work together seamlessly to create the signature sound of Pyramaze. New vocalist Terje Harøy brings power and catchy melodies with a modern flair, but without sacrificing the dark and progressive edge that Pyramaze is known for. The furious, progressive, and precise thrash-infused riffs of new guitarist Jacob Hansen lay down a rock solid foundation upon which soaring vocal and guitar melodies leap and bound. Lead guitarist Toke Skjønnemand brings the shred, and offers undeniably memorable guitar solos with both a modern and classic influence.

Pyramaze is devoted to making music that mirrors the band member’s souls, combines all of their influences, and stimulates the mind and spirit of their listeners. The band will forever be committed to making the melodic art of a group that understands the importance of staying true and faithful to one’s passion.

“Divided by oceans, bound together by brotherhood, we must become that which divides us…. we are PYRAMAZE, and we are the Ocean!”