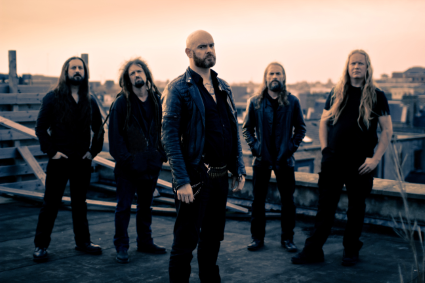 Looking back, 2008 was really the year a lot changed for Primordial. Previously, we had always been a critically acclaimed band, getting good reviews and press with a growing and loyal fan base but without the fanfare afforded other bands.

To The Nameless Dead came out very late in 2007 and by early 2008 the press began to come back and neither we nor Metal Blade had really seen anything like it; we topped the soundchecks in Rock Hard, Legacy and Metal Hammer, getting full mark reviews all across the board in most magazines. Not only in Germany, but all across Europe things began to move and the Summer of 2008 saw us conquering festivals all across Europe and even we could see everything was growing, countries we had never made much of a dent in before like Finland, France, Norway, and Sweden, for example, were becoming new strongholds for the band. To The Nameless Dead quickly outsold 2005’s The Gathering Wildernessand it was obvious to us we had moved out of the underground into the mainstream, or at least we were being feted by the mainstream for the summer of 2008. At this stage in our careers, it was more or less something we took in stride, too long in the tooth to be moved to conceit or false modesty; it felt somehow vindicating that we were finally taking our message to bigger stages and more people without having compromised a thing.

In the winter of 2008, we went out across Europe with Finntroll among others as part of the Heidenfest festival. This was a great success overall and without a shadow of a doubt we won over some new and younger fans. This was the year that the cultural metal zeitgeist was pagan metal and we felt it somewhat our duty to take part at least in one of these tours to show people that there was a darker side to the scene and that we can be considered one of the original bands of the species. Some may have complained we didn’t fit into that scene and to some degree they were right, but a career in music can last a long time, so the chance to reach new people was something we had to do and. No regrets, as usual.
So taking stock after 2008, Primordial reached a new level with To The Nameless Dead after almost two decades of playing music. It may seem strange that a band might reach a new level and seem somehow still new and challenging for a new generation of metal fans and festival goers, but this is exactly what happened. The band, as usual, took it in stride with bemused shoulder shrugging, a sense of ‘we told you so’ and a shot of whiskey for good measure.

The following year continued much as 2008 had left off; we went on our first North American tour as part of the Paganfest. The fest saw 8 shows in Canada and 17 in North America with Korpiklaani and Moonsorrowamong others. It had become obvious that just as in Europe, North America was falling under the spell of pagan metal and the kids were hungry for anything European. We also saw many older, old school metal fans and black metal people who had followed the band for years waiting for us to tour showing up, especially on either coast of America, Los Angeles being a fitting climax to a great tour and experience for the band.

The summer continued with the odd festival in Europe and a few mini tours here and there but the prospect of writing new songs was now hanging over us. For the first time we felt the weight of expectation. Previously we had always been something of an unknown quantity but now mainstream metal fans were wondering where we might go next afterEmpire Falls became our beer hall festival anthem and we stepped blinking into the light of the mainstream. The year ended with us sketching out some new ideas and tentatively planning a new album in 2010.

This was the year that wheels very nearly came off completely. After nearly 20 years of playing together we began to unravel. Having always been a strong live band we began to have a few off nights worse for the wear for drink and all the temptations that go with touring and festival life, culminating in a disaster of a show in Athens which nearly spelled the end of the band. The messy details are already on the internet and were dissected at length at the time but needless to say that night represented the low point of two decades in the band.

The aftermath of that show was that our drummer, Simon O’Laoghaire, was asked to leave. Recording for the new album was put on hold indefinitely and we began to audition drummers over the summer of 2010. We honoured some festival shows in Lithuania, Hungary and Belgium and later in the year, a mini tour of Spain and Portugal taking in Madrid is the Dark, all without Simon, but it became clear to all of us that he along with any of the band are essential components, take away one and we can struggle through somewhat lame but it isn’t Primordial.

So we sat around, discussed, shouted, conceded and cajoled the circumstances until they took the shape of the five of us agreeing the band was bigger than all of us and it could only continue with those five people. Simon rejoined the band and we began to put the songs together in the autumn of 2010 for what would become Redemption at the Puritan’s Hand. We went into Foel Studios in Wales once again over December of 2010 and into January 2011 to record eight new tracks. The album was a ‘death’ album. Plain and simple. There isn’t exactly a complete concept, but many of the themes dealt with mortality and how humanity deals with it. People place spiritual structures around themselves to make sense of it all… sex, death, procreation, and god. As we get older, our relationship to our lives changes, the realization you will not live forever, the grand plan you hoped to uncover never materializes, you’re food for worms and nothing more.

“We are animals, beasts and making peace with that beast might be your life’s work but more often than not he is never tamed. Once a wolf always a wolf. We all seek redemption in one way or another, from lies or from truth. Those of us who are godless or faithle­ss often envy the man of faith for his life seems to have an extra purpose, despite the fact that logic, pragmatism, science and realism should crush any sign of faith, we still persist in lying to ourselves. Perhaps the alternative is too much to bear. So the themes of religion, mortality and death occur over and over again, along with continuing themes of alienation, martyrdom, sacrifice, violence and retribution. Occasionally, very occasionally, a chink of light breaks through.” – Alan Averill

However, time moves slowly in Primordial land. Prior to “Redemption,”Primoridal had gone through one of the most turbulent times in their history. Drummer Simon O’Laoghaire briefly departedand the future of the band appeared to be on a different path than they had all expected. However, they regrouped and out of that came “Redemption.” After that, the band seemed tighter than ever and Primordial spread their wings further and cast a slightly larger shadow then they had  ever done before. The album charted in several countries across Europe, most notably #31 in the German charts.

Primordialreturned to the States again, and of course returned to Europe for several tours, in addition to the usual Summer festival chaos. Averill continues: “Some time at the end of 2013 we sat and began to plot a course for album number eight. We moved camp to a new rehearsal room and the ideas began to take shape. We felt it was time to try a new studio and engineer so we went to grouse lodge deep in the middle of Ireland and employed Gomez (cathedral, angelwitch, grave miasma) to come over and work on the new album.” The band’s idea was, of course, to keep the Primordial trademarks but add a more live sound, broader and heavier. In 2014, we stand at the brink of releasing album number eight and, according to Alan Averill: “we feel revitalized, the hunger never left and we are ready for another chapter to be written in our history!”