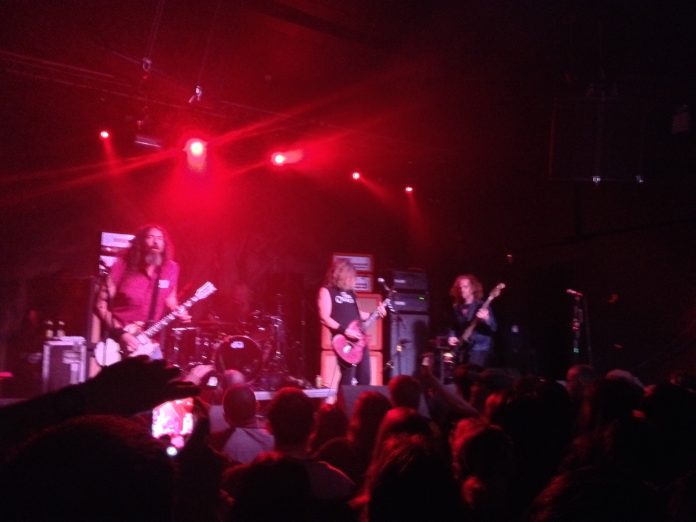 Reunited band deliver on the Deliverance Tour – and then some

This is a very different Hang The Bastard to that which you may have seen a few years ago. Now with former bass player Tomas on vocals and with new album “Sex In The Seventh Circle” out last Autumn, they are very much coming from a dirty, sludgy type of a place. Tracks are grimy in the manner of Dopethrone or Diesel King. This is monstrously heavy stuff and when they lock into a groove, Hang The Bastard are a fearsome proposition. The west Londoners are men of few words, they are totally immersed in their music and don’t speak at all on stage. HTB are a short – their set is just 25 minutes long – sharp boot to the face.

Over the years Corrosion Of Conformity have been many things and have had many line-ups. From their hardcore punk roots to their most recent incarnation as a three piece metal band. Whatever they’ve done, though, they’ve always been brilliant.

This explains why the Rescue Rooms is full to its very brim, but the song that plays right before they take the stage explains why tonight of all nights is so big a deal. You might know it. Its by Thin Lizzy and begins “guess who just got back today….” When it’s played tonight, however, it takes on a greater significance than just being one of the finest songs ever written.

What it means here is that Corrosion Of Conformity are back as a quartet. Pepper Keenan – a man so talented he’s in not one but two of the worlds best bands (he’s also Down’s guitar player) – is back adding a second guitar and his distinctive, deep vocal tones to things, and even if no one plays the guitar quite like Woody Weatherman, and there isn’t another bass player quite like Mike Dean, and even allowing for the fact that Reed Mullin is an incredible drummer, there is just some alchemy that goes on when all four are onstage together and everyone in here knows it.

Not unreasonably, tonight’s set is made up of songs from the period between 1991 and 2006, when Keenan was actually in the band. It begins, rather cleverly, with the instrumental “These Shrouded Temples” which was the first track on the “Blind” album from a staggering 24 years ago. The first real song that’s aired “Señor Limpio” is the cue for Nottingham to lose it’s minds – and sanity, quite frankly, is not regained for the next 90 minutes.

Corrosion Of Conformity are incredible tonight. The set is heavy on “Deliverance” tracks, lucky then that the album is so very good. “Heaven’s Not Overflowing” in particular sounds mighty in this setting, while there’s a good number of tunes from it’s follow-up, the brilliant “Wiseblood” as “King Of The Rotten” makes an early appearance, and “Big Whip” swaggers and grooves it’s way in.

They play like a band reborn. Mullin, who left the band in 2001 so hasn’t been on stage with Keenan in 14 years, gives a drumming masterclass, and when they play songs like “Albatross” it’s as if they have never been away. The general freak out of “Paranoid Opioid” could not have happened if all weren’t on top form.

COC save their best for last. A four song encore essentially ends any lingering doubt that this is close to being gig of the year. After initially being surprised that there was people on the balcony that they hadn’t seen all night, Keenan asks if the throng would like a “heavy song or a smooth song?” With that obvious question answered “Welcome Man” is a sledgehammer, “Vote With A Bullet” is all aggression and power, before “Who’s Got The Fire” (which hasn’t been played for nearly a decade before this tour) and “Clean My Wounds” bring things to a tumultuous conclusion.

The magic that these men had is back and has been a joy to watch tonight. It might only be March, but this show isn’t going to be far from the top of the end of year polls. Final word goes to the returning singer himself: “Nottingham,” he announces. “I intend on getting very drunk tonight…….” Down at Dino’s Bar And Grill, you hope. Because Corrosion Of Conformity are very much back in town.