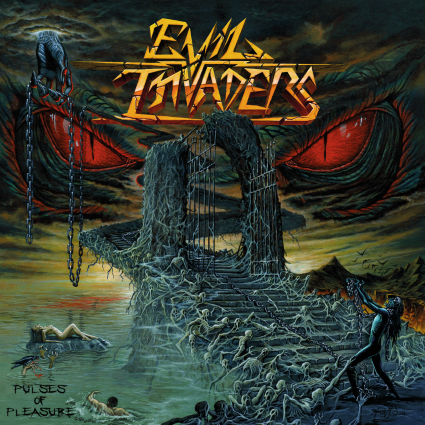 Young Belgians get fast, loud and rude on new one

Back in the old days, when the two people that now make up MVM used to go record shopping about 25 years ago, even if we didn’t know the band, you knew that if the tape (yes we are THAT old) had the distinctive red and white spine of Atlantic Records, it was gonna be a goody.

Maybe Evil Invaders (although considerably younger than either of MVM) have a similar opinion on these things. Either way, when you call the opening track on your full length debut record “Fast, Loud ‘n’ Rude” it’s only going to end one way isn’t it?

Happily on the song things are fast. Things are loud. And yep, you guessed it, rude too. Job done then?

You suspect yes, because the band named after a song by Canadian speed metallers Razor, don’t appear to want to do anything on this record other than make as much noise as possible while firing riffs and solos off at a breakneck speed. The title track, for example, packs more action into its opening minute than some bands do in an album, and whether you enjoy this slightly scattergun approach or not Evil Invaders keep coming at you until you just have to give in and get swept up by the sheer youthful abandon and ebullience here.

Vocally singer/guitarist Joe seems to want to take his cue from something that comes halfway in better early Exodus and Anvil. His delivery – ranging from low to high-pitched screams, sometimes in the same line –  can be slightly overpowering, but once you get used to it there is much to commend “….Pleasure.”

At it’s best when the songs – which are all longer than you might initially think – are given room to breathe amongst the sonic boom, the Maiden-esque freak out of “Stairway To Insanity” a case in point, and some of the guitar work here from lead man Sam is incredible, as things fly by in a blur.

They save the best for last. “Master Of Illusion” with its twin guitar stylings – and let’s be honest here you can imagine a certain Mr. Bruce Dickinson yelling “scream for me” over its intro, is, you’d guess where the band will be a little more on their next release.

“Pulses Of Pleasure” is a statement of intent from a band that seem to have lofty ambitions. It might have a little bit of misplaced energy in places, but it hints at tremendous potential, and is, it appears, the only record that Evil Invaders could have made at this stage.