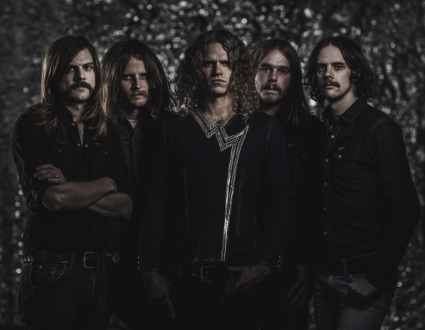 MV loves these guys. And there’s a new album. Yay!

Formed in 2006, Horisont have spent close to a decade kicking ass, taking names and establishing themselves at the forefront of the Scandinavian retro rock revival (see also Witchcraft, Graveyard etc), injecting their sound with early-Status Quo-styled boogie blues, prog complexities, NWOBHM swagger and fire-spitting choruses set to scorch the eyebrows of the first ten rows. This is music made without irony, unafraid to acknowledge an allegiance to past greats such as Deep Purple, Black Sabbath, Cactus, Thin Lizzy, the aforementioned Yes andJudas Priest.

Their first two albums Tva Sidor Av Horisonten(2009) and Second Assault (2012) earned Horisont a special place in the rock underground, while Time Warriors (2013) was a no-holds barred demonstration of classic rock and metal combined with a fearlessly inventive streak, and took them to a wider international audience. And now comes Odyssey, a bold leap into more expansive and ethereal musical territory. It’s the band’s first to feature native Australian and former Church Of Misery guitarist Tom Sutton.

The new line-up change sees a definite gear-shift too. Here Horisont play as if their lives depend upon it: duelling guitars do battle in a endlessly thrilling interplay over a rhythm section that gallops like wild horses across the frozen tundra. And cutting through the middle, Axel Söderberg’s howling heartfelt vocals delivered with a space-age sense of soulfulness.

There are surprises aplenty throughout – witness the melodic Jethro Tull-style breakdown in the middle of ‘Blind Leder Blind’, flamenco/folk flourishes on ‘Flying’, the fist pumping classic metal anthem of ‘Back On The Streets’, the almost Ziggy Stardust-esque ‘Beyond The Sun’ or the elegiac eight minute long album closer ‘Timmarna’, which evokes the awesome beauty of a dying star careering off into darker distant universe. Then there’s the majestic former single ‘Break The Limit’, which was accompanied by a gloriously grainy 1980s VHS-style video, complete with much split screen action. This is expansive, emotive music that’s far more than five hirsute men creating a voluminous ruckus. 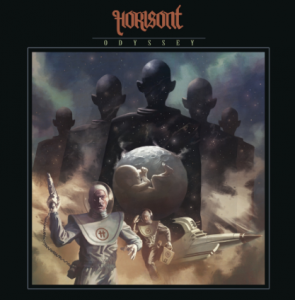 Odyssey was recorded in Studio Kust in Gothenburg with producer by Henrik Magnusson. It was, the band explain their most harmonious creative period ever.“No Horisont recording session has ever been this good,” admits Delborg. “We had worked with Henrik on our ‘Break The Limit’ single and knew that he was our guy. All the basics where recorded live in just a couple of days. Then we spent a lot of time on the intricate details.”

The artwork for Odyssey harks back to both classic sci-fi paperbacks and prime prog rock albums of the 70s. “We wanted a slightly disturbed, Asimov-esque science fiction cover that told the story of Odyssey,” says drummer Pontus Jordan. “Tom knew this guy who was really in to old science fiction stuff and he had done the cover for The Order Of Israfel. So we meet the guy and it was the one and only Henrik Jacobsen. And he really nailed it.”

Strap in, sit back and let the Odyssey begin….