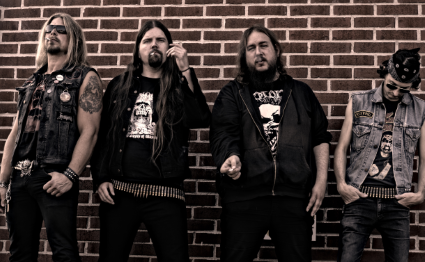 ‘Allo ‘Allo whats all this then? Call the Metal Police

Started in 1992, Gehennah, hailing from Forshaga and Karlstad, Sweden, first stunk up the scene with their debut album “Hardrocker” released on Primitive Art Records in 1995. In a time when atmospheric black metal and melodic death metal ruled the metal underground, Gehennah’s filthy street thrash stuck out like a sore thumb. The band gained a loyal following among elite metal fans and also released the now infamous anti-christmas themed single “No Fucking Christmas” before leaving Primitive Art Records for Osmose Productions.

The years with Osmose saw the release of the albums “King of the Sidewalk” and “Decibel Rebel” along with touring with among other bands Impaled Nazarene and Disfear. The first years of the new millennium was mostly spent playing chaotic gigs and committing random acts of stupidity, and also releasing the anniversary EP “10 Years of Fucked Up Behavior” in 2003 (11 years after the band was formed).

In 2013 founding member and bass player Ronnie Ripper left the recently re-formed Gehennah but he was soon replaced by the bands’ long time friend and drinking comrade Charley Knuckleduster. The line-up change resulted in the band increasing their criminal activity and in 2014 Gehennah released the four song 7″ EP “Metal Police”, which led to the band signing a deal with Metal Blade Records.

Previous article
Kruor Have Nightmares!
Next article
Crash And Burner!